Charlestown-Nevis—It is a historic first.
On Tuesday 16th June, six former crossing guards working on the island of Nevis, were officially introduced to the general public, having been elevated to the position of TRAFFIC WARDENS.

The brief ceremony was held at the Charlestown Police Station’s conference room.
The new nomenclature according to Supt. Hilroy Brandy comes with added responsibility and powers.
They will now only assist with Crossing Guard duties where necessary but will primarily work out of one of the Police Stations on the island and travel with and assist the Police in the performing of traffic related duties.
They will be able to issue traffic tickets if required and will have the powers to carry out arrests where necessary. This they can do with the assistance of any good citizen, according to Supt. Brandy, 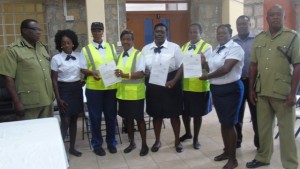 Inspector Conrad Bertie who is the manager of the Traffic Department on Nevis and who coordinated the effort to train the new Traffic Wardens, pointed out some of the topics covered during the training period, which commenced in October of 2014.

These included but were not limited to:
• Courtroom procedures which included the presentation of evidence
• Traffic laws
• Statement writing
• Customer service