1`Roseau – Prime Minister Roosevelt Skerrit Tuesday said the proposal submitted by his Antigua and Barbuda counterpart, Gaston Browne regarding the efforts to prevent the liquidation of the cash-strapped regional airline, LIAT” “needs to be further fine-tuned”.

“As I have indicated publicly and privately, we will provide support that the Prime Minister of Antigua and Barbuda is pursuing because if it works it can certainly ensure more access, more flights coming into our country because the Antigua-Dominica connection is critical,” Prime Minister Skerrit said Tuesday, following the meeting on Monday night of the major shareholder governments of LIAT.

“We wait and see. Once we have more details, obviously it is an initial proposal that was submitted that has to be further fine-tuned based on the discussions last night and then I could share some of the details of that subsequently to the Dominican public.

“But we shall wait and see, but just to say we will support the initiative once the refined documents come back to us, but we support him,” Skerrit told radio listeners here.

The four major shareholder governments of the Antigua-based airline are Antigua and Barbuda, Barbados, Dominica and St Vincent and the Grenadines. Antigua has made it clear it does not support the idea of liquidating the airline, which owed more than EC$100 million to its creditors.

Browne had circulated ahead of Monday’s shareholder’s meeting a reorganisational plan for LIAT that proposes reinvestment of EC$108 million, with St John’s indicating that under the new plan it is prepared to underwrite up to 50 per cent of the required capitalisation.

“The new capital invested during reorganisation will be protected, in that it will rank in priority above all other creditors in the unlikely event of liquidation,” it said, noting that the remaining EC$54 million to be shared by other private and public sector entities, including existing shareholder governments.

However, the Antigua plan said if the existing shareholder governments are not interested in investing in the reorganised LIAT, they will be requested to surrender their shares for EC$1, which it claims is a superior offer to what they would get in liquidation.

Skerrit said that Browne made a presentation to the meeting, but that both St Vincent and the Grenadines and Barbados have made it “indicated their unwillingness to participate in any reorganisation of LIAT for the time being”.

“They have given Antigua the green light to proceed with its reorganisation plan. There are a number of issues to be addressed in that process and we will wait and see,” he said. 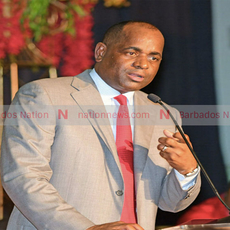 Skerrit (left) said that he has always made it clear that the aim of his administration is to get safe and reliable air transportation service for Dominicans and, in this regard, his administration has since agreed to “support all initiatives to improve and increase air travel arrangements in the Caribbean, and Dominica included”.

“So we will provide route licence to One Caribbean, we shall support to Inter-Caribbean in terms of route licences, we continue to work very closely with the expansion services of Air Antilles. We shall provide the licence to SVG Air . . . and we have given the green light for Caribbean Airlines to fly into Dominica as well,” Skerrit said.

Earlier this week, St Vincent and the Grenadines Prime Minister, Dr Ralph Gonsalves, said he had offered to sell the island’s shares in LIAT to Antigua and Barbuda for one EC dollar.

“I don’t want to stop Antigua and Barbuda wanting to do what they want to do,” said Gonsalves, who is also chair of the shareholder governments.

He added that the offer includes Antigua and Barbuda paying Kingstown the value of the debt that the government guaranteed during LIAT’s re-fleeting exercise, which was conducted a few years ago.

“The debt which we guarantee on the three planes at the CDB [Caribbean Development Bank], let’s value the planes and the amount of money which we owe the CBD on these planes, pay me that and I get out of it [LIAT] and you do what you want to do.

“Because we are going to liquidate, when we liquidate, any debt we have at CDB, we are still responsible for, in respect of LIAT, but to the extent to which we had signed,” he said, adding that different governments guaranteed different portions of the debt.

“You want the planes, we will get the planes valued,” he said, adding that he believes the aircraft might be valued around US$10 million each.

“LIAT has served St Vincent and the Grenadines pretty well. We have had different times, 42, 49 flights a week, sometimes more than that, and we collect a lot of taxes because of the number of people who went on LIAT and so on and so forth.

“I am prepared, even the money which LIAT owes the Vincentian government for fees and some taxes and so, I am prepared to write that off because I can’t get it back in any case in liquidation. LIAT doesn’t have any assets,” Gonsalves said.

The St Vincent prime minister also said that he had told Browne from the beginning that he does not want to do anything to stop Antigua from doing what they want to do, regarding LIAT.

Skerrit told radio listeners on Tuesday that his administration is also pushing ahead with plans for the construction of an international airport and is hoping to start the geo-technical studies as early as September.

He said the studies could have been done earlier had it not been for the coronavirus (COVID-19) pandemic that prevented the officials from China arriving here.

“We have placed the international airport as priority number one . . . and I am redirecting a lot of state resources . . . to the project,” he said, hoping that payment will be made to farmers “as early as next week” for their crops that would be destroyed during the exercise. (CMC)