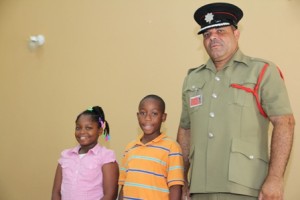 Mr. O’Garro’s comment came in an interview with the Department of Information, at the end of the three-day programme at the Jessups Community Centre when 35 participants were presented with certificates at the end of the programme which read “… has learned the rules of fire safety and prevention and is hereby granted the title of Junior Fire-fighter St. Kitts and Nevis Fire and Rescue Services.”

“From all observations the programme appeared to have been a successful one just from the enthusiasm that you see from the kids, how they displayed what they learned over the past three days and so in my opinion I would think the programme was a complete success,” he said.

The Deputy Fire Chief gave a brief overview regarding the establishment of the annual summer programme and stated that it stemmed from fire safety concerns for the Federation’s children.

“The programme was brought about because of a general concern with safety for the kids. About 10 years back we had two or three incidents involving fatal fires that involved kids and that became a serious concern to us and so we basically put some heads together to come up with a programme that would help to curtail some of these incidents and this is where the summer safety programme came out of.

“It has been going for nine years now and I am proud to report for the past five years we have not had any incident involving fatal fires where kids were involved so the programme is definitely meeting its intended objectives,” he said.

“During the programme we always select the top two participants. How do we judge this? Based on participation, the knowledge they have gained and are able to reciprocate in answering questions. For those two, we have Tyh-ree Hanley; that’s the Junior Chief Fire Officer and the Junior Deputy Fire Chief is Kayla Harris.

The programme commenced on Monday July 15, 2013 and at the opening ceremony, Divisional Fire Officer David Stapleton explained that the programme was designed to be short but informative at the end of which, the children would be able to understand the dangers of fire; what it took to make a fire; fire safety procedures; fire preventative tips and how to make a family escape plan.

However, it did not only cater to fire safety but also exposed the participants to traffic safety; water safety and recently added an introduction to basic disaster preparedness.

A number of parents and guardians were also present at the programme’s closing ceremony. It was chaired by Fire Sub-Officer Abdias Samuel. Main sponsor TDC’s Representative Ms. Keesha Jones distributed certificates to the participants.
END