Windiescricket.com
The four finalists for the CG United Women’s Super50 Cup were confirmed today after Guyana defeated the Leeward Islands by eight wickets in the final group stage match at the Guyana National Stadium. The home’s emphatic win was set up by a terrific four-wicket haul by with the new ball by Tremayne Smartt, the former West Indies player. 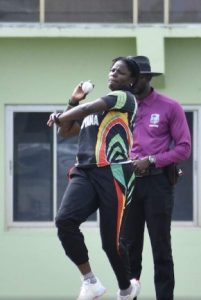 Terez Parker was the lone Leewards batter to reach double figures and she struck a hard-fought 22 off 64 balls which included three boundaries, but her side slipped to 76 all out in 29.5 overs. Veteran seam bowler, Smartt cleaned up the Leewards batters with excellent figures of 10-2-12-4.

This was followed by Cherry-Ann Fraser who was also accurate with her seam bowling to snatch 3-19 off eight overs.

Guyana made light work of the run-chase as skipper Shemaine Campbelle made a stylish 30 not out, which came off 35 balls and included four boundaries.

At the other end, Shabika Gajnabi chipped in with 14 not out off 12 balls with two fours to take their team to victory in 14.3 overs. The pair added an unbroken third-wicket stand of 36. Earlier, Katana Mentore got the home team innings going with a brisk 16 off 21, which included three boundaries. Leewards skipper Shawnisha Hector was the lone bowler to get a wicket, finishing with 3-0-7-1.

The semi-finals will have some intriguing math-ups. Defending champions Barbados will face Trinidad & Tobago in the first contest on Wednesday. Jamaica, who won the T20 Blaze, will continue their pursuit of the “double” when they face the home side on Thursday. Both matches start at 9:30am Eastern Caribbean (8:30 am Jamaica Time).

Netball Is Back at The Main Stadium.