BASSETERRE, ST. KITTS, MARCH 27TH 2014 (CUOPM) – “In life you only get one chance and so having the opportunity to serve this long is really a chance in life that I don’t know how many others would have that opportunity,” said St. Kitts and Nevis’ Prime Minister the Right Hon. Dr. Denzil L. Douglas during a two-hour Special Edition of “Ask the Prime Minister” on Tuesday. 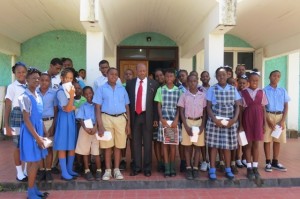 The weekly one-hour radio programme aired for the first time on television was one of the highlights to mark the 25th Anniversary of Prime Minister Douglas’ service as a Member of Parliament in the St. Kitts and Nevis National Assembly.

The Special Programme had several firsts. Firstly, being done in the television studios, secondly with a live studio audience of primary and high school students from his constituency and hosted by Dr. Joyelle Clarke, who was introduced by Erasmus Williams, the Press Secretary to the Prime Minister.

Responding to questions, the St. Kitts and Nevis leader told a student from one of the primary schools, that he wants to make sure that he makes good use of his chance not only to serve for 25 years, but also 19 years as Prime Minister, but also as the longest serving in the Caribbean and the Commonwealth.

“It makes me feel that I have really done something worthwhile with my life,” said Dr. Douglas, who said it was an opportunity that was given to him by now National Hero and Father of Independence the Right Excellent Sir Robert Llewellyn Bradshaw back in 1965 when he financed his attendance at the then St. Kitts-Nevis Grammar School.

Dr. Douglas said whatever he and the Nation have achieved is firstly by the will of God and the support of the people. 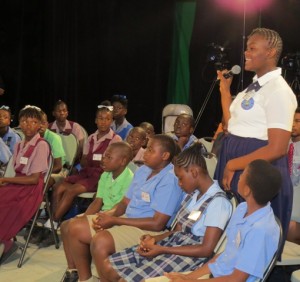 “I recall growing up in the village of St. Paul’s as a child and even when I had the opportunity to go off to the Grammar School there was so much open and naked criticism of the people of St .Paul’s. When I got the opportunity of course to educate myself and eventually I became a medical doctor, I was determined that I wanted to serve my people, to make them better. My very first clinic medical clinic was in St. Paul’s, because I felt as I said we had been profiled as stereo- typed. I felt definitely that service to make people better would be important as part as a personal satisfaction of my life and then I had the opportunity back in 1989 to be representative of all of the people of Constituency # 6 – Newton Ground, of course St. Paul’s, Dieppe Bay, Parsons, Saddlers, Lynches, Lavington, Harris’s. It was brining a team together during that elections and working very closely with each other, consulting, listening, planning and executing and relying to a large extent on the elders who had been involved in politics,” said Dr. Douglas to the students, the Nation and the Diaspora.

He disclosed that although his mother had died when he was just one year old, Prime Minister Douglas disclosed that it was not until he was 7 or 8 years old that he had no mother.

“It was a very strange thing that I didn’t have a mother. In fact I think the first realization of not having a mother came one Sunday in Sunday school when during Easter I think it was you had to wear a particular colure at that time. You were been told if you were white or if you had some other colour it would indicate that your mother was dead. And it was in that realization that I got the understanding that I didn’t have a mother because in my home I had elder sisters. My eldest sister was Virginia, I had another sister just after Virginia, Versilda, Althea and I had all of the love that I could every think of so I didn’t really have a mother and I make the statement because it’s the love in the family and how the family members relate to each other to a large extent that gives you that support that motivation that is required to sustain you in the end for the rest of your life,” said Dr. Douglas.

He told the students that one’s upbringing has a lot to do with how one will behave later on in life. 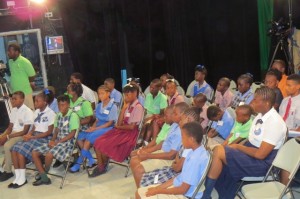 “I came from a family that was very rooted in the service of God. I mentioned that I didn’t even recognized, didn’t know my mother, but I knew my father. My father was a very God- fearing man. He was a disciplinarian. He would tell you why you are being discipline. Why he considers you to be wrong and why he is going to punish you and so really I believe that it was those earliest teachings and instruction,” said Dr. Douglas.

He also recalled that as a child on Sundays, his father use to send him to several homes in the village of St. Paul’s as many people from that village had migrated to England in early 60’s.

“ A lot of our people couldn’t read and write and my duty on a Sunday afternoon when it was possible, was to go to different homes and write letters for those families who had their children or husbands or whoever were in England – most of them in England or abroad – and I was always kept rooted in service to people and we believe that I was given a talent at age 12to be the only one out of the entire school of St. Paul’s to be successful at the entrance examination because there was a time in 1965 when for you to go to a high school you have to first passed a examination that the entire country all the students around the entire country would write that examination and at age 12 at the St. Paul’s Primary School I was the only student who passed that examination,” said Dr. Douglas, whose scholarship was personal from Robert Bradshaw.

“During that entire period, I always felt that I was given an opportunity in life which several other people didn’t have and therefore I have dedicated my life to give everyone else that opportunity. I have remained humble, committed and close to the people because of my very nature- my upbringing that’s who I am that’s what you see that’s what I am,” Dr. Douglas said.

He recalled that after opening a medical clinic in Saddlers he made representation to Mr. Sidney Morris, the then Minister of education at that time under the PAM administration demanding that something should be done with regards to the situation at the Saddlers Primary School.

“I remembered standing in Parliament and challenging them and demanded that the school meals programme be expanded to Saddlers.

“So I think that the desire to ensure that our people are properly educated, our people are properly sheltered and that they have opportunities for jobs, not only in the cane fields but at the highest level in the country in Government Headquarters as engineers, as medical doctors, as dentists, accountants. The idea was to make sure that our people from this constituency was an asset of the society serving the interest of our country and ensuring that they make their contribution in the development of St. Kitts and Nevis,” said Prime Minister Douglas.

The programme also highlighted Prime Minister Douglas as the “Captain Of The Ship,” a “Special Thank You Prime Minister,” “Bill Clinton Initiative,” “St. Kitts And Nevis Transformed,” and “We Love You PM.”

Prime Minister Douglas treated the 25 students and teachers to lunch at Carambola.

As COVID-19 cases continue to rise in the Americas, many are at risk of developing…