St. Kitts and Nevis engages with cultural heritage experts at the World Heritage Committee in Azerbaijan 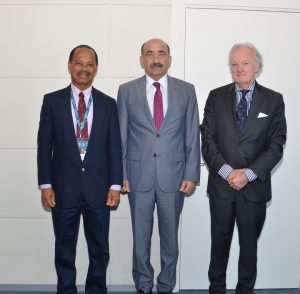 Over the coming week St. Kitts and Nevis will pursue its participation at the UNESCO 43rd session of the World Heritage Committee being held in Baku, Azerbaijan, with an active level of engagement with historical and natural cultural heritage experts from 193 States Parties to the World Heritage Convention.

St. Kitts and Nevis was elected to the World Heritage Committee in November 2017 for a period of four years – soon to be the only small island developing state on the Committee – thus providing a position of leverage not only in terms of contributing to deciding on the heritage proposed by sovereign state parties to the World Heritage Convention, but also in securing valuable expertise for the Federation.

The St. Kitts and Nevis delegation – comprising Mr. Percival Hanley, General Manager of the Brimstone Hill Fortress National Park, and official representative of the Federation to the Committee, and Dr. David Doyle, Ambassador of St. Kitts and Nevis to UNESCO – participated in a prominent exchange of views with its fellow 21 members on the world heritage Committee, the most influential UNESCO body.

On the fringes of the conference in Baku, the St. Kitts and Nevis delegates seized the opportunity to seek potential technical assistance, expertise and funding to support of the Federation’s cultural heritage framework.

One of the highlights of this engagement was a separate meeting with the Minister of Culture of the Republic of Azerbaijan, Mr. Abulfas GARAYEV (see photo above). Ambassador Doyle discussed the prospect of Azerbaijan providing professional training in heritage skills at specialized education institutions.

The Federation’s delegates also initiated discussions with major US and German heritage foundations focused on providing expert advice on the recalibrated series of heritage sites on the island of Nevis, which include ancient sites of religious worship.

The 43rd world heritage committee provided a pivotal opportunity before 2,500 delegates from more than 180 countries representing sovereign states and international organizations to underline the lack of critical expertise and capacity across small island developing states (SIDS).

Ambassador Doyle tabled two amendments to the Baku Ministerial Declaration, calling upon the “need to assign a higher priority to small islands states in terms of capacity-building assistance in relation to identifying and preparing sites for inscription on the world heritage list”.

The Delegates from St. Kitts and Nevis were involved in the entire heritage committee deliberations, involving some 225 decisions and the inclusion of 19 cultural monuments on the World Heritage List. During the Baku session of the Committee, 36 out of 42 proposals for inscribing on the world heritage list were considered, including 6 natural, 28 cultural and two mixed (natural and cultural) monuments.

Noted Mr Hanley: “a unique opportunity for the Federation to be intimately involved in reviewing and voting on some of the most important natural and cultural sites in the world, which included this time the ancient city of Babylon and an Icelandic national park replete with glaciers, ice caves and volcanoes, now amongst the sites that have been added to UNESCO’s world heritage list”.

As the Federation scales up its activities in preparing a number of historical sites on the island of Nevis for a potential inscription on the World Heritage List, the additional opportunity to secure heritage preservation and management expertise while in Baku was not lost on Ambassador Doyle: “a wealth of substantive expertise was discussed in assisting the Federation to prepare a time-consuming and detailed submission of multiple sites on the island of Nevis for review by the UNESCO world heritage programme experts, notably ICOMOS.”

ICOMOS is a network of experts that benefits from the interdisciplinary exchange of its members, among which are architects, historians, archaeologists, art historians, geographers, anthropologists, engineers and town planners.

The St. Kitts and Nevis delegates shared the expectation that ICOMOS would be returning to Nevis soon to provide upstream advice on the range of sites identified by the Nevis Heritage Committee.