Prime Minister and Minister of Finance, the Right Hon. Dr. Denzil L. Douglas told hundreds of party supporters on Friday that the national debt has been reduced from 200 percent to 100 percent and his Labour Party Administration is now prepared to move the country forward in the transformation of the economy. 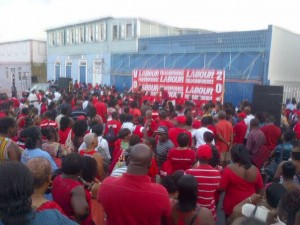 “I told you all months ago that we had a new economic development plan. I told you that we had to do certain things if we were going to move forward. We said we got to bring down that ‘bamancoo’ national debt right down. It got to come down! It got to come down! It was 200 percent of GDP. Thank God, last week, it went down to 100 percent of GDP. Now we can move forward,” said Prime Minister Douglas.

He said his Government is one step ahead of the rest and nothing is going to stop the forward movement.

“How are they going to stop us? And so I emphasise we are moving upward and forward. Comrades, the vision is what they don’t have,” said Dr. Douglas, who reiterated that his St. Kitts-Nevis Labour Party has a vision for the future of the twin-island Federation.

“We are transforming the economy. We have to move agriculture to become one of the leading productive sectors in the future and that is why I say to you again that we are attracting people into agriculture. We want hydroponics. We want green houses, we want shade housing, we want aquaculture, we want to make sure that we don’t depend on the rain when it falls to irrigate our crops because we want crops all year round,” said Prime Minister Douglas.

He said the government’s People Empowerment Programme (PEP) was providing young people with new skills and referred to the several construction projects now underway that will propel the economy into positive growth.

Construction is now taking place on the EC$27 million Imperial Bay Golf and Beach Residences at Half Moon Bay/Conaree area, the US$76 million Golden Rock Commercial Park, next to the Robert L. Bradshaw International Airport, that will include a boutique hotel, supermarket, restaurant and bar, amphitheatre and meeting rooms and the US$38 million (EC$103 million) Silver Reef development at Frigate Bay which continues with the construction of three additional buildings which will add 18 additional bringing the total number to 90 apartments in 9 buildings,

Ground breaking has already taking place for the US$90 million Pelican Bay Limited at Potato Bay; and the EC$87 million Ross University expansion in the West Farm.

The Park Hyatt St. Kitts is already under construction at Christophe Harbour, the US$180 million Koi Resorts and Residences will soon break ground in the latter part of this year and the Saddle Hill Adventure Park, a new locally-owned attraction for locals and visitors alike was officially opened last week.

Phase one of the 20-acre Agro-Tourism Farm has been completed with the construction of a 16,956 square Green House and the second phase has begun for the Botanic Garden, Fruit Farm and two Flag Images at the entrance.

Construction of the multi-million dollar Kittitian Hill Resort and Golf Course continues at St. Kitts’ Belmont Estate in St Paul’s and is to be opened in November/December this year.

Work is to start soon on the construction of a tunnel at Timothy Hill on the Dr. Kennedy Simmonds Highway and the entire highway also that stretch of road from the Bay Road via Sand Down Road, Pond Road to Frigate Bay Road and to the South East Peninsula Road.

Construction of a roundabout at the junction of the Frigate Bay Road and the Kim Collins Highway is in progress.

“All over the country our small developers are now coming alive and they will be empowering most of our people from the PEP because they will now find permanent employment in this new creative establishments that we are putting forward,” said Prime Minister Douglas.

“Comrades, we want to make sure that with our vision, giving every student in High School his/her own personal laptop computer. That is the vision for the future. You now can stay at home, lay as long as you want in your bed, turn your bedroom into your office and there begin to roll out apps that can be sold to the rest of the computer world and from which you can be paid for your creativity and your knowledge that you would have acquired; that’s your future in St. Kitts and Nevis,” Dr. Douglas told the large crowd.

He said that the recent Partial Scope Agreement with Brazil will see electronic products made in St. Kitts and Nevis entering the Brazilian market – the fifth largest economy and market in the world.

“That is vision. That it is the future and that is what we are talking about. No longer must we have Electrofab closing down; Lutron letting off people, they must be hiring people in the future as we woo the manufacturing sector into the productive economy of St. Kitts and Nevis. That is vision that is our future,” said Prime Minister Douglas.

Dr. Douglas said the economy of St. Kitts and Nevis, like that of the rest of the world has gone through some painful adjustments “but the painful adjustments was to give us a brighter future, a more envisage future for you and your children, as we move this great country forward and upward.”