St. Kitts-Nevis Bids Farewell to the President of the Republic of China (Taiwan) After Successful State Visit

BASSETERRE, St. Kitts, July 16, 2019 (Press Unit in the Office of the Prime Minister) – Prime Minister Dr. the Honourable Timothy Harris led a farewell celebration at the RLB International Airport earlier today (Tuesday, July 16) for President of the Republic of China (Taiwan), Her Excellency Dr. Tsai Ing-wen, who concluded her first official State Visit to the Federation of St. Kitts and Nevis.

The Taiwan delegation was sent off with a Military Guard of Honour and well wishes from dignitaries including Prime Minister Harris, the Honourable Ian Patches Liburd and Cabinet Secretary, Mrs. Josephine Huggins.

While in the Federation, H.E. Dr. Tsai engaged in a number of diplomatic and social events all aimed at strengthening the bonds between St. Kitts and Nevis and Taiwan.

This included a visit to the sister island of Nevis where the Republic of China (Taiwan) president, alongside Premier the Honourable Mark Brantley, broke ground on the multi-million dollar Pinney’s Beach Recreational Park Project; laid a wreath at the Christena Memorial in honour of those who lost their lives in the 1970 disaster; and visited the Museum of Nevis History.

While at the same venue, President Tsai also participated in the signing of an agreement on Cooperation in Technical and Vocational Education and Training (TVET) between the Governments of St. Kitts and Nevis and the Republic of China (Taiwan) at the Park Hyatt St. Kitts. This agreement will assist St. Kitts and Nevis with cultivating vocational education teachers, establishing a comprehensive vocational education system, and providing high school graduates with professional skills. 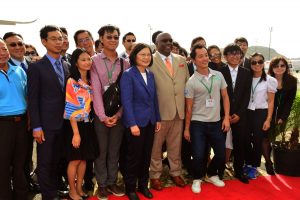 The visiting Republic of China (Taiwan) delegation had a full day of activities on Monday, July 15 which commenced with a visit and luncheon at the UNESCO World Heritage Site, the Brimstone Hill Fortress National Park. There, the history and culture of St. Kitts and Nevis were on full display punctuated by performances by local masquerade groups.

From there, President Tsai and Prime Minister Harris did a brief walkthrough at the Berkeley Memorial, also known as The Circus, in downtown Basseterre. Hundreds of citizens and residents lined the side of the streets for a chance to glimpse, meet and have their photos taken with President Tsai.

One of the highlights of State Visit came later on Monday at Government House where the Governor General of St. Kitts and Nevis His Excellency Sir S. W. Tapley Seaton conferred The Order of St. Christopher and Nevis on H.E. Dr. Tsai in recognition of her “devotion to the promotion of shared values” and for upholding the accomplishments of the “commendable cooperation between the Federation of St. Christopher and Nevis and the Republic of China (Taiwan).”

The Order of St. Christopher and Nevis is the highest honour that can be bestowed on a non-national.

President Tsai also planted a tree at Government House which symbolized the future growth and deepening of the relationship between the Taiwan and St. Kitts and Nevis.

A Father is a ‘King’