The much anticipated St. Kitts-Nevis Sports Summit (SKNSS), commenced at the Brown Hill hardcourt on the evening of Sunday 11th August.

Senior Sports Officer in the Department of Sports, Mr. Kelvin Bramble, whose brainchild it was, ably chaired the proceedings. 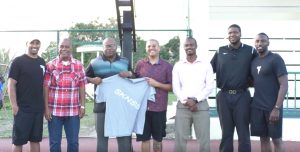 Director of Sports, Mr. Jamir Claxton, in offering remarks, praised Mr. Bramble for the initiative and pointed out that his Department did not have all of the resources and so was always happy to have partners to assist in the execution of various programs.  In that regard, he thanked the various organizations and sponsors who had come on board, to make the program a reality.

Also giving remarks was Mr. Michael Henville who stated that he was speaking on behalf of his family’s foundation – CARIBBEAN FOUNDATION FOR CHILDREN and was happy to present a sponsorship cheque to the cause.

Marketing officer at the Bank of Nevis, Mr. Pheon Jones, indicated that as usual, the bank was happy to be a part of anything to do with sponsorship, sports and the development of the community on a whole. He stated that the bank was all about ‘improving the quality of life’ and presented two branded basketballs for use during the camp.

Some of the visiting trainers also made an input.

Josh Cordoza of the TRUE CHAMPS FOUNDATION, noted that they were happy to be in Nevis, to be able to impact the youths and be able to impart knowledge.  He noted that the makeup of trainers included people with phenomenal experiences who have been involved in athletic rehab, therapy and sports testing, with athletes of the highest order.

Jerome Smith, the owner of ALL IN TRAINING, also stated that the coaches were happy to be in Nevis to impact the youths. He stated that TRUE CHAMPS stands for true character and said that they were not just investing in sports but more so, in the future of the youths.  He went on further to state that they were willing to make the training session an annual event until Nevis produces a NBA star.

Selase, the owner of CHECK MY ATHLETICS, indicated that the focus will be on the testing of the athletes, in terms of speed, agility, strength and explosiveness. The results will be placed on the NBA website and the local athletes will be able to do comparisons with some of the top athletes in the world.

Bringing down the curtains, was Minister of Sports, Hon. Eric Evelyn.  He had high praise for Mr. Bramble, noting that he benefitted from a sports scholarship and now is ensuring that other youths get a similar opportunity to excel.  He indicated that Bramble even went to Canada to do some groundwork for the program and spent some of his own funds, to ensure that the initiative was a success.  He opined that even though Nevis is small, we should be thinking big and therefore one NBA player is not enough. He was looking forward to several NBA players from Nevis in the future.  He wished the overseas trainers every success in their endeavours and hoped that they would also find time to enjoy PARADISE (NEVIS).

The training sessions are expected to run for the entire week, with sessions at the Grell Hull-Stevens Netball complex and the Brown Hill hard court.