Charlestown-Nevis- The 13th annual edition of the summer job attachment program for 2016, officially got underway on Monday 20th June, with an impressive ceremony, which was held at the Red Cross Headquarters, situated at Chapel Street.

Director of the Youth Department, Miss Zahnela Claxton, addressed the gathering in a sterling presentation, during which she commended the students for having applied and arrived safely through the interview phase. She noted that the one week workshop and subsequent job attachment, will serve as an opportunity for the interns to receive critical on the job training and to see what the role of an employee, is all about.

She pointed out that some employers complain that some new workers are lacking in ‘soft skills’ such as their general demeanour, courtesy and the like, which are generally valued more than mere academic qualifications.

She stated that the theme for the week is ‘Preparing Global professionals’ and further indicated that once the students complete the course, they would qualify to work in any working environment, across the world.

She also mentioned the very important element of VOLUNTEERISM, which would also serve the interns well, as they seek to enter colleges and universities, across the globe.

A former graduate of the program, Miss Joanne Manners, eloquently shared her experience from last year’s program, which was well received. She also shared a bit of advice with the interns:

Asst. Secretary in the Ministry of Social Development, Miss D. Michelle Liburd, then addressed the gathering. She gave an overview of some of the subject areas that will be covered for the workshop and critically drew to the attention of the interns that they are existing in a very competitive world, where there are more graduates from school than there are available jobs. She impressed on the young minds that only motivated self-starters will impress and be the first ones to be selected for job appointments. She admonished the interns to get as much from the workshop as possible so that they can fall into the elite group of self-starters.

She then outlined for them, some of the qualities or hall marks of a true professional.

She closed by thanking the Youth Department for coordinating the program; the business places for coming on board and the facilitators who will effectively train the interns.

Minister responsible for Social Development, Hon. Hazel Brandy-Williams then addressed those present and challenged them to be ready for what the world has to throw at them. She further advised them to:

She also told them to ask questions so that they could learn as much as possible as ‘there is no such thing as a foolish question.’

She then declared the one week workshop open.

The participants were then encouraged to relax as they engaged in an ice breaker session.

Director of Youth, Miss Zahnela Claxton, then gave an inspirational address, which served as a motivation for the young interns and then Miss Curdyce Clarke took them through the paces with her presentation, during which she differentiated between a JOB and a CAREER.

The workshop will continue throughout the week and climax on Friday 24th June. 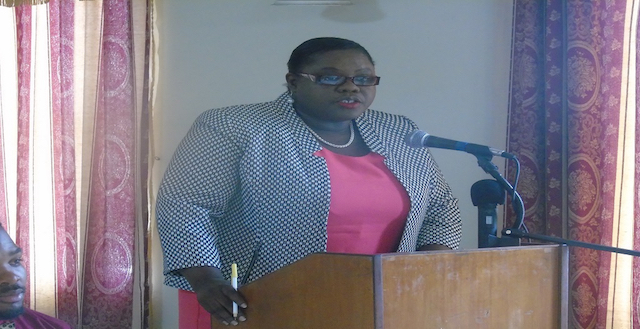