“Today we were paying persons who brought the proper documents for former sugar workers who are deceased and persons who are overseas,” explained SWRF Officer Ms Thyra Gumbs. “These are third party claimants for persons living overseas and those deceased.”

According to Ms Gumbs, 25 cheques were disbursed on Thursday and the process will continue next week as they are still receiving the documents from third party claimants.

“Persons from overseas sent in notarised letters authorising their friends or relatives here to claim for them,” noted Ms Gumbs. “The documents were checked by our attorney to see if they were authentic and then we proceed to the accountant to prepare the cheques for them. That took a little while longer than the normal ones who are here because we had to make sure that the documents were authentic.”

The office was also presenting cheques for deceased former sugar workers whose relatives brought in ‘grant of probate’ documents. Those are the ones who would have gone to lawyers outside to complete the process. Ms Gumbs pointed out that persons who are using lawyers provided by the government will be paid once the process has gone through.

Mr Ambrose Nathaniel Hull of Stapleton St. Peters worked in the Stapleton Estate for over 40 years. When the industry closed in 2005, he would have retired and was as a result not paid anything. He however passed away three years ago and in spite of his physical absence, his family has benefitted.

His daughter Mrs Shirley Ferlance was one of the persons who received, on Thursday November 5, a third party claimant cheque on behalf of her deceased father.

“I am grateful because he did not get anything when the industry closed,” said Mrs Ferlance. “He is passed and now for me personally I can give his grandchildren something and say this is for helping me care for my father because I was his caretaker along with my children.”

Asked how she got to know about the new pay-out to former sugar workers, Mrs Ferlance said that she heard the information on the radio and she applied. She said that she received good assistance at the Sugar Workers Restoration Fund office during the process and did not have any problem whatsoever.

Mrs Carmen Nisbett Sweeny has been living in St. Croix for the last about 25 years. Before she left the country, she had worked in the sugar industry on Stapleton Estate for a number of years. When Prime Minister the Hon Dr Timothy Harris announced that the Team Unity Administration had sourced a grant of EC$16 million dollars to pay the aggrieved former sugar workers, her grandchildren swung into action.

“My grandmother is from Upper Monkey Hill St. Peters,” explained Mr Eustace France who was at the SWRF office on Thursday to collect a cheque on her behalf. “She worked on Stapleton Estate in St. Peters for a number of years, until she departed St. Kitts to go to live in St. Croix. She is not on island, but she is happy for this. As a family we are happy because once one is wealthy, all of us are wealthy.”

Mrs Nisbett-Sweeney learnt of the pay-out from her granddaughter, Ms Novilia Rawlins who is Mr France’s sister. After Ms Rawlins got consent from her grandmother by way of a notarised letter, she went to the SWRF office where she was assisted by the office personnel and the process was completed without a hitch.

Now living in New York, Mrs Carefree Livingston Liburd has reason to smile about as her son Mr Alonzo Liburd of Keys Village was at the SWRF office on Thursday to collect a cheque on her behalf. She had worked in the sugar industry at Hermitage Estate before she relocated to live in the USA. 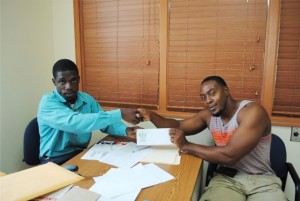 Asked how the family felt following the sourcing of the EC$16 million to pay former sugar workers and the fact that he had just received a cheque on behalf of his mother, Mr Liburd said: “Thank you for repaying my mother. You know she has worked hard and now she has reaped the benefits. Thank you very much.”