Basseterre, St. Kitts- The Embassy of the Republic of China (Taiwan), reaffirmed its support to the Royal St. Christopher and Nevis Police Force in a very simple but significant handing over ceremony on Thursday 2nd, April 2015 at the Taiwan Embassy in Basseterre, which will assist in the hosting of the Association of Caribbean Commissioners of Police Conference which is to be held in the Federation next month. 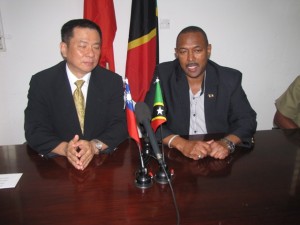 Ambassador of the Republic of China (Taiwan) to St. Kitts and Nevis, H.E. George Gow Wei Chiou, successor to H.E. Miguel Tsao, presented a cheque in the amount of US $3500 to the Assistant Commissioner of Police (ACP), Mr. Ian Queeley, in the presence of the Deputy Councilor to the Ambassador Mr. Eugene Shu, Inspector Lyndon David, and media officials.

Ambassador Chiou indicated that with the handing over of this check, it is a symbol of his willingness to continue to assist the Royal St. Christopher and Nevis Police Force. He stated that he vows to continue the support and work initiated by his predecessor Amb. Tsao.

He added that “In Taiwan, the police are very important to people. They are the safeguard of the people… Police is the model of the citizens and best friends of the citizens.”

ACP Queeley in accepting this donation, expressed his appreciation and thanks to the government and people of the Republic of China on Taiwan for the continued support to the development of the Royal St. Christopher and Nevis Police Force and said that this donation will certainly enhance the quality of the product that will be delivered at this conference.