BASSETERRE, St Kitts – President of Taiwan Her Excellency Tsai Ing-wen will make an inaugural visit to Nevis on July 14, 2019. The visit is integral to the commencement of Pinney’s recreational park project at the cost of US$3 million, funded by Taiwan in collaboration with the Nevis Island Administration (NIA). 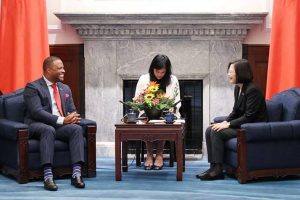 Mark Brantley, Premier of Nevis believes that the inaugural visit to Nevis will be of significance to the island.

“I believe that is significant for us because we have had, I think, five presidents who have visited before from Taiwan, none have crossed The Narrows. This is the first time that a president from Taiwan will touch Nevisian soil,” he continued.

“The idea is to create a park which will feature jogging trails, picnic area, children’s recreational zone, large central area which would continue to accommodate large events such as the Culturama Food Fair. The project is expected to take just over two years to complete and so we look forward very much for that long-awaited project,” he said.

Ahead of the visit, the Taiwan Embassy in Basseterre on Tuesday, June 25, made a substantial financial contribution towards the rehabilitation of Old Road Bay, towards a significantly enhanced, safety and security for road users along the 1.2 kilometer road.

The Old Road Bay road is being extended on reclaimed land and will be approximately 24 feet apart from the existing road. It will also be elevated some 15 feet above the current road level with guard rails on both sides. The seaside protection will include strong rock armouring similar to the protection at Port Zante. The construction work is being carried out by local company Rock & Dirt Construction Ltd.

Resident Taiwanese Ambassador to St Kitts and Nevis, His Excellency Tom Lee hands over cheque to Cabinet Secretary, Josephine Huggins. Looking on are (L-R) Chief Personnel Officer, Torfrida Rochester; Prime Minister Dr Timothy Harris; Minister responsible for Public Infrastructure, Ian Patches Liburd, and Director of the Public Works Department, Cromwell Williams.
At the cheque presentation, His Excellency Tom Lee, said: “ The Republic of China (Taiwan) is a strong ally of St Kitts and Nevis and we are always willing to stand by your side and provide timely assistance to what you need, and we are very pleased to work with your government and [to be able] to make a contribution to this project.”

Prime Minister Dr Timothy Harris recalled that after the passage of Hurricanes Irma and Maria in September of 2017, the Old Road Bay Road became completely impassable for vehicular traffic, resulting in commuters having to endure a much longer journey and users of public transport having to incur higher fares to and from Basseterre.

“Each time there is a significant climatic change, and in particular the advent of hurricanes, the Western corridor of the country becomes disconnected starting at Old Road and this makes it difficult then for one to traverse from Old Road to Basseterre or any other point beyond Old Road into Basseterre,” Dr Harris said.