Conaree, St.Kitts (TUCOM-January 28th 2015):-Tuesday January 27th was a long day for Team UNITY. It was a busy day which saw the decision on the injunction filed given by Justice Marlene Carter. It was a day when the movement began to step up its election campaign preparations. It was also a day which saw Team UNITY’s largest meeting to date in the storied village of Conaree.

A very energetic and excited crowd of thousands packed the streets of Conaree to listen to Team UNITY’s message of “Prosperity for ALL”.

In a very upbeat and inspiring presentation, Hon. Dr. Timothy Harris declared his Team UNITY’s commitment to housing in the Federation. He declared that Team UNITY will construct and or facilitate the ownership of 2000 homes in its first term of office.

Team UNITY’s innovative and visionary “Prosperity for All”Agenda shows that housing is of paramount importance. In addition to the 2000 homes, 1000 lots will become available with the repeal of the St. Kitts-Nevis-Anguilla National Bank (Vesting in Certain Lands) Act, which saw 1200 acres of government land being essentially given away to cover runaway debts being accrued by the incumbent Labour Party administration. The availability of housing lots will be also significantly enhanced with the reclamation of the LaVallee Greens for suburban development.

Team UNITY’s visionary Prosperity Agenda will see the removal of VAT from all Foods, Medicine and Educational Supplies, in addition to the establishment of a Universal National Healthcare Insurance Plan and free Universal Pre-School Education among other innovative and progressive policies.

The Conaree meeting was memorably packed with excitement and culminated with a jam session with the Road March Champions Small Axe Band.

Team UNITY next heads to Trafalgar Village with the Hon. Sam Condor on Thursday January 29th at 8p.m. 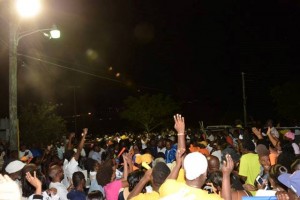 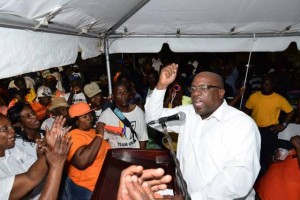 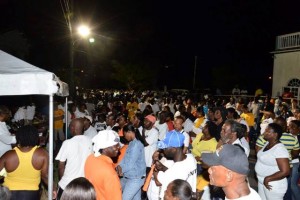