BASSETTERE, St. Kitts, Mon. Feb. 9, 2015: Team Unity’s Candidate for Constituency #2, Jonel Powell knocked the competition out of the water in a show of force at a Rally to end all rallies in Central Basseterre.
Earlier that evening Powell challenged Labour’s Marcella Liburd to a debate. As residents gathered in the streets at the corner of Central and Fiennes Avenue in support of Powell, to hear the vision he has for his Constituency, Liburd was a no show! 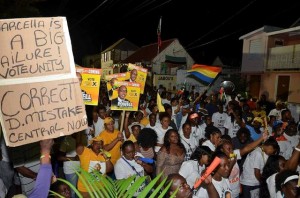 Later, a massive Rally was convened in the streets where some 1500 or more residents gathered. The roar of the crowd was deafening as speaker after speaker espoused the issues of the day, calling for an end to electoral fraud, nepotism and chronyism, crime and violence, victimization, dilapidated housing conditions, vermin infestation and other health challenges impacting residents throughout the Constituency. Liburd is Minister of Health under the Douglas administration.

We have a country to rebuild my family, said Ian “Patches” Liburd, Team Unity Constituency # 1 Candidate. The crowd roared their agreement.

The Master of Ceremonies Dr. Irvin Sweeney reminded Powell of the political legacy he stands to inherit. He referenced past political leaders hailing from Central Basseterre, including Rt. Hon Dr. Sir Kennedy Simmonds, Dwyer Astaphan, Sir Robert L Bradshaw. Dwyer and Simmonds, former political heavy hitters took to the podium endorsing Powell. Dwyer reminded the crowd that Jonel Powell’s great, great uncle Thomas Manchester, was the first leader of the Workers League which eventually became the Labour Movement. Powell, the youngest member of the Team and an list of accomplishments under his belt, represent the PAM party under Team Unity.

“Douglas is a clear and present danger to our democracy,” said Sam Condor, Candidate for Constituency # 3. “Free and fair elections are the cornerstone of democracy. We have to decide if we want democracy or a dictatorship!”
Acadia Harrigan, young resident of the Constituency, sung a rousing rendition of “A Change is Gonna Come” the 1951 song of oppression by Sam Cooke.

Each Candidate spoke of the vision that is outlined in Powell’s “Agenda for the Development of Central Basseterre. The document, with a Motto “Better Days are Coming,” frames a detailed plan to revitalize Constituency #2 and provide for better quality of life for all its residents.
Cutie Sadler, a resident of Central Basseterre took to the podium and riled up the crowd with “Familyyyyyy, are we ready for Jonel in Central? Are you Ready? Refrain! The crowd began to chant “early out, vote them out!” the battle cry said to be the psychological impetus to end the tyrannical rule of the Douglas’ administration.

Dr. Kennedy said that he could not stand by and see the Federation of St. Kitts and Nevis destroyed. He called on the people to wake up from their slumber and take back their country. “Douglas has made a mockery of our country,” he said. “Our economy is in shambles, the national debt is at $3 Billion, violence and corruption is the order of the day!” Shawn Richard, Leader of PAM and Dr. Timothy Harris, the next Prime Minister under Team Unity expressed similar sentiments as they endorsed Powell. They point to a new beginning under Team Unity. Dr. Simmonds, calling on his supporters to come out and support Jonel Powell, said “Unity is the best thing that has ever happened to St. Kitts and Nevis!”

Powell took to the podium as the frenzied crowd erupted in jubilation. He called to them, “Familyyyyyyyy” Familyyyyyyyy” a local colloquial greeting of love and respect that seems to say “we’re in this together.” The crowd responded in ecstactic fashion. “You ready for the change?” he asked to shouts of consensus. Several in the crowds held signs that say “We must correct the mistake of 2010” a reference to his opponent, Liburd, who residents say “only comes around at election time.” Powell outlined his Agenda for change, a mini manifesto that once implemented will provide a major shift in the quality of life for his entire constituency. The manifesto addresses crime and violence, education, a centre for innovation, amnesty for caribbean nationals, habitat for elders, recreation and community activities, urban re-development, the Gardens Housing Project and a major renovation for the Basseterre Ferry and Bus Terminal. Powell delivered an emotional appeal to his constituents, asking for their votes, and promising “Central Basseterre will be energized, revitalized!” he said. “Hold me accountable, he said, in 5 years when I come asking for your vote, this document will be the benchmark that you can use to hold me accountable!”

Infrastructural Development and Digitization of Records Identified as Areas to…