Basseterre, St.Kitts (TUCOM-January 23rd):- If there was any doubt left about the impact that Team UNITY has had on the political landscape of St.Kitts-Nevis and even the sub region it was erased last evening with the hugely successful massive launch of the Candidate for Constituency #6. 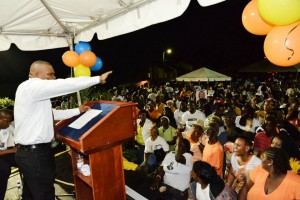 In front of what is being describes as the largest non-Labour Party Political meeting in the history of Constituency #6 well known Educator Mr. Vernon Connor was introduced and presented as the Team UNITY Candidate for that Constituency as a mammoth meeting in Dieppe Bay.

The massive crowd was very receptive to the Charismatic Educator who impressed all with a message of Hope , Community Pride and UNITY. The born and bred Constituency#6 lifelong resident called on his fellow constituents to be proud of the constituency they live in and vote there and do not allow anyone to influence them to partake in Criminal activity.

Connor encouraged his fellow constituents to vote at home and be proud of their constituency and not be known as illegal people voting where they do not live. He implored that the level of debate should be elevated . The massive audience was overwhelmingly receptive to Connor’s call.

In commenting on the meeting Leader of Team UNITY Hon. Dr. Timothy Harris said “ This is a Team UNITY Public Meeting in Constituency#6 the backyard of Dr. Douglas . Who now still doubts that Unity is on the road to a historic victory? When a still then unnamed Unity candidate can draw this type of crowd in what use to be Douglas city, that bodes very well for UNITY in Constituency 6, and even more so in the rest of the country. It tells the true story that the whole Nation agrees: It is Time.”

“When Douglas, in his usual dismissive, disrespectful, and taking for granted style declare that Mr. Connor was a non-entity and he only needed one vote, the people of Constituency#6 , in their overwhelming support of Mr. Connors launch last evening, demonstrated that one of their own will not be dismissed or disrespected; and they will no longer be taken for granted by one who is suppose to be their servant, but has declared himself the maximum leader,” concluded Dr. Harris .

The support shown for Mr. Connor’s candidacy on Thursday evening continues to indicate the groundswell of support for and the embracing of the creed and policies of Team Unity and it’s Prosperity Agenda. An agenda which includes the removal of VAT from Food, Medicine, Educational Supplies and Funeral Expenses. In addition to the removal of pre-school fees as well as reduced low income house mortgages and student loan payments.