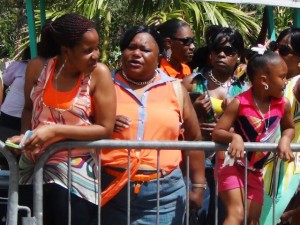 The Vern ‘N’ Llew Preschool held its annual sports meet at the school ground on Monday 25th March. The meet was held under the distinguished patronage of Mrs. Govanie Manners-Hendrickson.

The three competing houses paraded smartly to commence the meet and then the exciting action on the track commenced. Principal at the school, Teacher Collins explained that the theme for the day was ‘TEAMWORK’ and the emphasis was on the children working together for the good of their specific teams.

For instance, for the thread the roll race, one student carried the thread and another team member thread the roll and ran to the finish line. Similarly, in the socks and shoes race, two members of each house competed in each age category and when one child had completed putting on his or her socks and shoes, he or she was responsible for assisting the other team mate in getting on theirs and then both would hold hands and race to the finish line.

Teacher Collins noted that the idea was to give the children a firsthand lesson in sharing and helping each other.

Other races included sack races; tyre races; dress up races; obstacle races and flat races. It was only during the flat races that the children were allowed to compete as individuals.
At the end of the day, the point standings were as follows: