The 1998 class of the Prospect Primary donates to its former school now known as the Ivor Walters Primary School.

Brown Hill, Nevis – The school grounds of the Ivor Walters Primary was a scene of benevolence on Thursday 25th April, 2013 as the staff and students alike witnessed the presentation of some educational games and other educational stationery which is deemed necessary in the everyday matriculation of the students at the school. Such a presentation was undertaken with the sole purpose of enhancing the overall learning experience tendered at the school as well as increasing the social interactions. This was an initiative undertaken by the class of 1998. 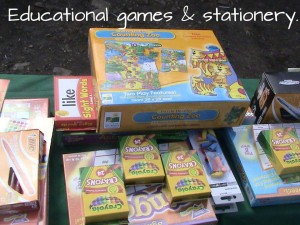 Mr. Tito Chapman indicated that discussions have already started with regards to awarding the best boy and girl for the 2013 commencement service. Additionally, Mr. Tito Chapman indicated that the class of 1998 would continue to partner with each other to garner other necessities that would be useful for the school both in the short term and long term. Mrs. Ilena Mills, Principal at the school, commended the class of 1998 for this timely and thoughtful gesture and wished the group success in their endeavours.