(CHARLESTOWN NEVIS) –The Henry’s Memorial Wesleyan Holiness Church, Buck’s Hill Village, Gingerland, Nevis recently hosted a week of activities to celebrate its 94th anniversary. The church was founded in 1919 by Mrs. Rhoda Henry affectionately known as ‘Mother Henry’ after whom the church is named. 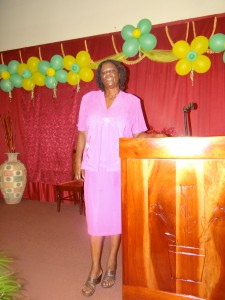 The original structure of the building back in 1919 only provided accommodations for preaching and christenings. Weddings and funerals had to be conducted elsewhere. However, despite the church short comings, Mrs. Henry was determined to make the best of what was at their disposal. By the time she retired the church had grown and developed into a vibrant establishment, and one that became a key player in the lives of many persons from the Gingerland area.

In 1985 with the arrival of Pastor Aldain Charles, the church took another giant stride forward when construction began for the new church. The fully refurbished church was completed in 1986.

The Henry’s Memorial Church has had many prominent members over the past 94 years. One such longstanding and prominent member is Mrs. Viola Dore of Scarborough Village, Hanley’s Road, Gingerland, Nevis. Mrs. Dore has been a member of the church since 1952.

She acknowledged the great historic importance of the anniversary, and the tremendous contributions of the founder, who 94 years ago brought the church into being. According to Mrs. Dore things may look very easy today, but the Nevis of almost 100 years ago was very different from that of today. She is of the view that persons should be grateful for the contributions the church has made and continues to make in the spiritual development of our people.

Mrs. Dore also spoke about the deterioration of the church in this modern era. She said, ‘I’ve noticed over the years that the attendance at church has severely declined. In yesteryear you seldom found a person missing the opportunity to congregate with fellow worshipers, because going to church was necessary. People are now skipping out on opportunities to learn about God and to be with his people. It is an attitude problem. If the attitude was fixed, the attendance at church would not be nearly so bad’.

Mrs. Dore said new ideas to prepare our people for the future are needed. ‘There is need for us to build a new awareness, because our young people have not been walking on the straight and narrow path’, she lamented. ‘It is not that our country lacks awareness today, but such a new and complex time makes it very difficult for the youths to stick to the principles of the church’. Mrs. Dore was also of the perspective that parents need to play pivotal roles in the lives of their children and they should do everything within their powers to have the children exposed to the Christian faith from a tender age and to encourage them to maintain that faith as they grow older.

Mrs. Dore also marveled about the caliber of worshippers who attend the church. She spoke about the generosity shown by members of the congregation at the Henry’s Memorial Church. ‘This church has been blessed with some of the most generous persons known to mankind. There are some extremely kind and warm-hearted worshipers who attend the church especially, Mr. Hastings Daniel’. She said, ‘Mr. Daniel has a heart of gold and has always sought to fix any problem encountered by the church. It doesn’t matter how high the price may be’. She also spoke of the late ‘Bobo’ Walters, who she said used to go far and wide to ensure that the word of God was being heard and he never missed the opportunity to give back to the church in whatever capacity he was able to.

Choir Master and Musical maestro at the church, Mr. Alister Dore spoke about the importance of music in the church. ‘The music ministry of a church is important for the entire congregation. For the unsaved, it sets the mood for them to hear the gospel and receive the gift of salvation. For the newly saved, it should be exciting enough to awaken them to hear the Word of God; for instruction. For the more mature, it sets the mood for praise and worship of the Lord’. Alister is of the view that while the right music cannot save a ‘dead’ service, the wrong music could seriously dampen a lively one. Dore concluded that for any church service, ‘The music can be either a vitamin or a tranquilizer’.

The current pastor at the church is Pastor Cecily Browne. Pastor Browne is proud of the legacy left by the early pioneers who braved many a storm to keep the light burning and who have ensured the success of the church. According to Pastor Browne, many hands have kept the light of the church burning and those left behind endeavor to carry on the legacy, and pledge to continue building upon the foundation already laid.

Johnson battles to stay as PM amid revolt