The Scourge of the Dumped Junk Vehicles.

We live in times when many negative phenomena and occurrences are taking place in the world around us and the world at large. This includes a high incidence of crime and terrorism, natural disasters and large-scale disease, poverty and hunger. However, there are other issues which affect local residents in our beloved nation, some of which seem to go unnoticed and unmentioned. One such issue is the scourge of the abandoned junk vehicles that plague certain areas of the island, having been cast aside and left to rot, degrade and litter both commercial and residential locations.

Vehicles that have been condemned for one reason or another by owners and or mechanics are usually cast aside and left to degrade in areas adjacent to mechanic shops, body shops and sometimes vehicle rental establishments. This build-up of junk/wrecked vehicles usually goes unchecked and unmonitored by authorities and has been a problem for a number of years in Nevis. In addition to being abandoned in areas adjacent to mechanic shops etc.junk vehicles sometimes find their way into Ghauts. Areas littered with wrecked cars can become quite an eyesore, and take away from the pristine beauty of our island paradise, but there are many other negative effects that this phenomena causes. I will first summarize why these deplorable practices persist on our island, then I will discuss a few of the countless harmful effects that they can have.

Persons who cast aside and abandon wrecked/junk vehicles willy-nilly in various locations island-wide are unhampered from doing so because there is little to no monitoring of such practices, nor is there any enforcement of penalties for such practices, if there are any penalties in place in the first place. It seems as if the proper authorities are powerless to curd this detrimental practice, and those responsible for causing the phenomenon are not being held accountable for their actions.

Persons responsible for the problem are either ignorant of the negative impacts that dumping wrecked vehicles has on the environment and their neighbours, or they simply do not care. Nowadays, we pretend not to know better when our behaviours are harmful in some way or when it is inconvenient to do better. Also, we have entered an age when we simply cannot be bothered with being concerned for how our actions affect our fellow man or the environment. In addition, the cry of help resounding from concerned citizens regarding this matter seems to be falling on deaf ears as authorities seem to be powerless to do anything to curb or stop the problem. There seem to be no alternatives to this problem. However, after I discuss some harmful effects of this occurrence, I will highlight some practical solutions that can be effected for both the short and long term by the proper authorities.

I would like to now highlight a few of the many negative effects that the dumping of wrecked and old vehicles can have on both the environment and the citizens of our wonderful nation. Abandoned vehicles are a perfect place for the breeding and harbouring of pests such as rats/mice, mosquitoes, cockroaches, fleas, termites and ants. In addition, these vehicles can harbor vermin such as snakes which have been reportedly seen on the island and whose numbers may be on the rise.

As we should all know, many pests such as rats, cockroaches and mosquitoes are vectors for serious diseases. Rats are known to commonly carry fleas which can be responsible for illnesses such as the plague and certain types of typhus. Fleas can also breed extremely quickly and cause infestations in farm animals, household pets and even humans. Flea bites in humans can cause welts that itch severely and be a source of grave discomfort. Children who live in farm areas or with infested pets can often fall victim to the scourge of flea bites.

Mosquitoes are a pest that we are all familiar with. Abandoned vehicles trap rain water which can allow for the unhindered breeding of mosquitoes of all types. This can be a very serious health risk for residents as various types of mosquitoes can carry mosquito-borne diseases such as dengue fever, malaria, chikungunya, yellow fever, west nile virus and others. We are currently experiencing increased levels of rainfall which means that we can expect abandoned vehicles to add significantly to the quantities of mosquitoes that will infest our island in the months ahead.

Rat infestations are common in vehicle junkyards. Rats breed rapidly, and abandoned vehicles are a perfect place for this to happen. Rat bites and scratches can result in disease, infections and fever. Rat urine can cause the spread of leptospirosis which can damage the liver or kidney and even lead to renal or liver failure. Rat hair, dander and droppings can trigger allergic reactions in sensitive individuals and potentially can also trigger asthmatic reactions in asthmatics. Rat droppings are toxic, and can pose a problem if they are excreted on food stuff or on the tops of canned goods.

Abandoned vehicles can be detrimental to the environment. Rust from metals and leaking fluids and fuels can infiltrate the soil and pose a threat to soil organisms and plants/crops. Worse still, these substances are toxic and can potentially descend to the water table and pollute water sources depending on their location. Vehicles that are dumped in ghauts pose a very serious problem. Such ghauts allow for the free flow of rain and flood waters down the mountain to the sea. If they are blocked by vehicles during heavy downpours, flood waters could be diverted from their natural pathways into developed commercial and residential areas causing damage to properties and even loss of life.

Vehicles dumped in lots can pose an even more sinister threat. They can be used by criminals and suspect individuals to hide and conceal loot, drugs, guns and ammunition. Furthermore, bandits may well find abandoned vehicles to be ideal places to lay in wait for unsuspecting persons who they want to target for crimes of various sorts. Finally, when vehicles are dumped adjacent to residential areas, they can be an eyesore, bring down property values and increase the chances of pest infestations in those locations.

The responsibility and power to remedy this most serious yet under-represented problem in our island paradise lies with the proper authorities. Let us look briefly at some of the things that can be put in place to limit and in the long term eradicate the problem of vehicle dumping here in Nevis.

A) The government could implement a program to efficiently monitor and log the dumping of vehicles in terms of location dumped, quantities of vehicles, owner of vehicles and business entity responsible for dumping of the vehicles. This could provide jobs and serve as a way of keeping track of and regulating the problem.

B) Implementation and enforcement of penalties for dumping of vehicles. These could include:
• Fines/taxes
• Removal of dumped vehicles at culprit’s expense
• Blacklisting of repeat/non-compliant offenders
• Suspension of business licenses for repeat/non-compliant offenders
• Jail sentences
• Restitution to the Government/homeowners in affected areas

C) Where removal of dumped vehicles is impossible in the short or long term, pest control measures should be put in place at the culprit’s expense or fully/partially subsidized by the appropriate government entity.
D) For the long-term on an ongoing basis, the government could develop a program to have unwanted vehicles crushed and exported to countries that can use the metal and other materials. Revenue could be generated from such an arrangement, and the scourge of dumped vehicles could be a thing of the past. If the government wanted, they could contract this process to a private firm.

We have explored the issue of the scourge of dumped vehicles on Nevis, looking at its causes, effects and solutions. It cannot be said that we are unaware of this problem, for we see examples of this deplorable practice throughout the island. In addition to impacting the beauty of the island, it has other consequences. We are at a crossroads: What do we do to remedy the problem of dumping vehicles here in Nevis? Let us come together and tackle this issue for the short and long-term using all the resources at our disposal. 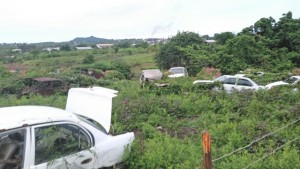 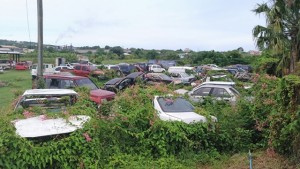 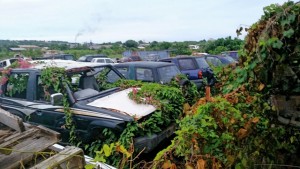 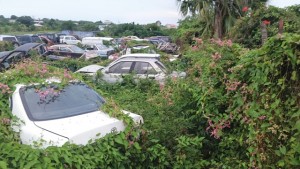 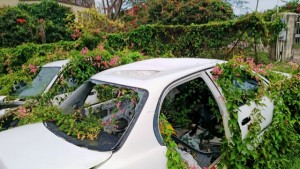 St. Kitts and Nevis continues to engage with Azerbaijan