BASSETERRE, ST. KITTS (SKNLPCU) – It was a carnival like atmosphere in Basseterre Friday afternoon, as thousands of St. Kitts/Nevis Labour Party (SKNLP) supporters took to the streets in protest against the government’s policy of political victimization, according to Kyss FM 102.5.

The march came exactly one year after the SKNLP lost the federal elections to the PAM/CCM/PLP coalition. During the march the opposition published a list of hundreds of its supporters that have been victimized to date.

Local broadcaster and radio station owner A.U. Browne of Kyss FM 102.5 reported that protesters chanted “Timothy has to go – Lord we cant take it no more, give we back the government we had before.”

“They also held placards in defiance to the oppressive government that is trampling on personal freedoms that read ‘I will not be silent. We free to March – We no got no girth. We are marching against this wicked government,’ etc. said Browne. 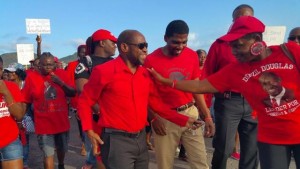 “The March was the first since SKNLP lost the February 16, elections to the triad. It started at 4p.m from the Paul Southwell Industrial Park and climaxed at the west line bus terminal/ferry terminal with an address by Party Leader and former Prime Minister Dr. Denzil Douglas. He told the huge crowd that “we marched against victimization, incompetence, nepotism and discrimination.”

He said that the march was witnessed by thousands of other people fearful of losing their government and private sector jobs. It has emerged that the government’s political victimization has extended to persons employed in the private sector.

“The government has adopted the policy of the Kennedy Simmonds administration, to oppress, fire and demote known Labour Party supporters employed by the government. PAM elite members and candidates are also known for calling on their supporters to not patronize businesses owned by known Labour supporters. Persons employed in the private sectors – by their financiers/supporters – the large companies – have been dismissed on a call from government officials as well, the opposition said.

Browne continued: “The Timothy Harris led Team Unity Government has been intimidating opposition supporters and has engaged in human rights abuses much to the dismay of the electorate that was promised “a new paradigm and prosperity for all.” Prime Minister Harris, at one of his press conferences told civil servants “not to follow members of the parliamentary opposition, the Hon Marcella Liburd, Konris Maynard and Dr. Denzil Douglas. “They know where their next cheque coming from,” he said. Attorney General Vincent Juicy Byron in an Sknvibes interview cautioned government workers and civil servants against wearing of red clothing, the official color of Labour.

Contracts with the government are being terminated and persons are being fired, or demoted without explanation. Others have been sent home pending investigations of manufactured charges. Fear has gripped thousands of people in the country as the government is determined to stifle freedom of speech, information, choice, association and affiliation.

By all accounts the protest was successful and the organizers say they are pleased with the turnout and show of support. They also promised to continue to mobilize supporters against the vindictiveness of the Team Unity Administration.”