Tourism minister Grant said he did not know, but FBDC Board Chairman Boncamper says “he knew all the way” 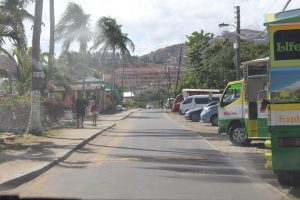 Basseterre, St. Kitts, April 24, 2018 – Blatant contradictions in statements from the Minister of Tourism, Hon. Lindsay Grant and the Managing Director of the Frigate Bay Development Corporation, Mr. Sleigh Boncamper on the Frigate Bay Strip scandal in which the government is attempting to replace local booth owners by increasing the rental of the booths as much as 400 percent.

It is widely believed the increase is aimed by driving the locals out of business and replacing them with their Team Unity friends, family members or foreigners.

After widespread condemnation and days of complete silence from the tourism ministry and the FBDC Board, Mr. Grant took to the airwaves stating the decisions are matters for the Board and not the ministry claiming that he was in the dark.

But Ministry official and Board members including the Ministry of Tourism Permanent Secretary and former BHS principal, Carleen Henry-Morton; Board chairman, Mark Wilkin and FBDC General Manager, Sleigh Boncamper, in an effort at damage control were guests on WINNFM’s “Inside the News” on April 14.

During the recent edition of “Issues” on Freedom 106.5 FM, Labour Party chairperson, Hon. Marcella Liburd noted that during the WINNFM interview, Boncamper pointed out that beach property is priceless and that plans to adjust the proposed increases were first compared to the rental value of space in Basseterre and Port Zante in justifying the increase in rent.

She said Boncamper disclosed that Minister Grant was kept informed on each and every proposal made by the Board.

“He (Boncamper) said that at every turn, when they came up with some suggestions (proposed rental rates), he take them down to the Minister,” she said.

Ms. Liburd further recalled when Mr. Grant called into the Issues programme hosted by Maurice “EK” Flanders, Mr. Grant said he knew nothing about the decisions of the FBDC Board.

“He (Grant) said he ‘does not know anything about it,’ confirmed Flanders.

“Mr. Grant said he leaves those things (decisions) up to the general manager and the Board, but here is Mr. Boncamper stating that ‘on every turn they went to the minister.’

Ms. Liburd credited Freedom 106.5 FM and Mr. Flanders, specifically for bringing the plight of the bar owners to the public.

She also commended the bar owners for placing the issue in the court of public opinion.