Mr. Herman “Bobby”Liburd was a true Nevisian patriot. My earliest memories of him was as a cricketer.
He wrote extensively in the newspapers while studying in Canada. He returned to Nevis in the late 1970s to begin his law practice and take a more active part in the political life of Nevis. 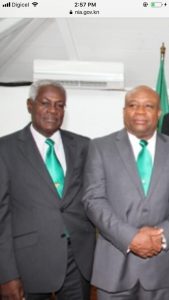 He epitomized decency, love and genuine concern for the welfare and well being of others. He established a law practice which was recognised for its propriety. He was known for his granite like integrity. During his career he turned down the offer to become a judge on a number of occasions.
His commitment to the Nevis Reformation Party (NRP) was remarkable. He was a great source of inspiration to me when I joined the politcal arena. He went house to house campaigning with me. He made his house and office available to us to host NRP meetings. What A Man!
He gave without counting the costs. He laboured and asked for no reward. He would always offer me money to help people in St. John’s and he never wanted to be acknowledged.
I will certainly miss his wise counsel. The NRP supporters can cherish his memory by working together and remaining loyal and conmitted to the ideals and policy of the Party. He has made a monumental contribution to the social, political and economic development of Nevis.
Flights of angels please sing him to rest!!