(BASSETERRE, ST. KITTS)- According to a Police Press Release two persons are currently in police custody assisting with the investigation of two incidents of suspected arson which occurred on Sunday, January 5, 2014. 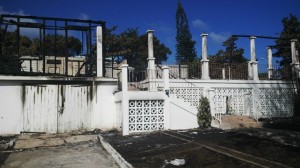 The release stated that about 4:15 a.m. officers of the Royal St. Christopher and Nevis Police Force, along with the K9 Unit, Fire and Rescue Services Department, Ross Island Constables Unit, K9 Unit, responded to a report of fire at the Venezuelan Embassy located at Wigley Avenue, Basseterre.

The release further indicated that the building was engulfed in flames upon arrival. However, the effort of the Fire and Rescue Personnel was unable to save the building and its contents.

Investigation revealed that the building was intentionally set on fire and an abandoned vehicle; motor car P7809 was found at the scene and taken into police custody along with other items.

Shortly after, officers of the Royal St. Christopher and Nevis Police Force responded to a report of fire at the OAS Mission Building which is situated at Horsford’s Road. A section of the building was set on fire and was extinguished by the Fire and Rescue Personnel.

Investigation revealed that the building was intentionally set on fire.

In his address to the nation on Monday, Prime Minister of St. Kitts and Nevis, Dr. Denzil Douglas condemned the fires and accused the opposition of being responsible for the acts.

“On the evening of Saturday January 4, 2014 , an illegal night time demonstration was held by PAM politicians and associates and around midnight that same night a fire was set at the Organisation of American States Secretariat and extinguished by our fire services, but a few hours later the Embassy of Venezuela burned to the ground, “ Dr Douglas said.

The Prime Minister named opposition politicians who he said on Friday night “rushed and mobbed a social gathering” that he and the Deputy Prime Minister were attending at a Port Zante business place “in an apparent attempt to intimidate either both of us or the business persons present there.”

He continued ‘people wishing to replace his government have been trying to stir up trouble for months, persons wishing to replace my government have asserted that we, in St. Kitts and Nevis, are gripped by a ‘crisis’. The public clearly disagrees and the public have behaved accordingly. These Opposition politicians have repeatedly berated Kittitians and Nevisians for not rising up…It is clear therefore that some have decided that since there is no crisis they will have to manufacture one.”

He warned that although his government respected the “rights” of persons to disagree with its policies and to demonstrate or protest, it would not tolerate any operational shift from disagreement and protest to destruction and mayhem in an attempt to create instability in the country.