Two suspected murders in Nevis in less than 24 hours

(CHARLESTOWN, NEVIS)- Nevis has recorded two suspected murders in less than seven hours apart from each other.

This publication understands that sometime after 9:00 p.m. last night Monday, May 20, 2013 a teenager was murdered in the Gingerland area. The news quickly spread and as a result the entire community is in shock.

The victim is said to be eighteen year old Chazere Davis of Taylor’s Pasture. It is alleged that she was strangled to death at her home by 52 year old Kelvin Williams also of the same address. Further information revealed that after the male committed this sadistic act he attempted to commit suicide. According to information received he was found by police at his residence in a semi-conscious state with what appeared to be self-inflicted wounds to his body.

He was taken to the Alexandra Hospital where he is now a patient. 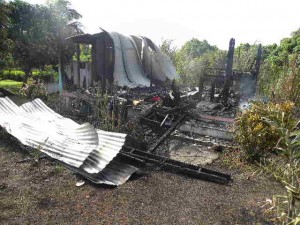 By day break the house of Williams was set on fire.

Hours after Chazere’s killing, the community was shaken again with the occurrence of another murder. According to information divulged, twenty-one year Jamal Isles Daniel was gunned down at his residence at Fountain Village.

It is alleged, that two gunmen went to his house and identified themselves as ‘police’. Allegations revealed that  they kicked  open the door and the attackers barged in. The perpetrators went straight to the bedroom of Isles and opened fire on him.

Isles did not survive his ordeal.

The police are asking anyone with information surrounding these incidents to call Nevis Police at (869) 469-5254 or Crime Stoppers at 1-800-8477 anonymously and free of charge.

Persons with information are asked to note that they may qualify for a reward.