• UK and CARIFORUM reach agreement on trade continuity.
• Deal will support development and economic growth in the CARIFORUM signatory states, for which total trade with UK is already at £2.5bn.
• UK food and drinks Industry also set to benefit from continued access to key Caribbean produce.
UK businesses and consumers will benefit from a trade continuity agreement maintaining current arrangements with countries in the Caribbean soon after Britain leaves the EU. 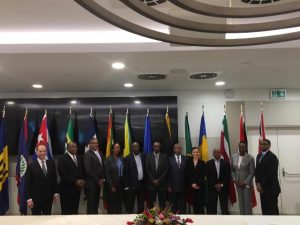 Trade Policy Minister George Hollingbery signed the UK-CARIFORUM Economic Partnership Agreement (EPA) today (Friday 22 March) with Ministers and representatives from Barbados, Belize, The Commonwealth of Dominica, Grenada, The Republic of Guyana, Jamaica, Saint Christopher and Nevis, Saint Lucia and Saint Vincent and the Grenadines.
The news has been welcomed by businesses and business groups including the West Indies Rum & Spirits Producers Association (WIRSPA), one of the oldest private sector trade associations in the Caribbean. WIRSPA represents some brands well known to UK consumers including Appleton, Angostura and Mount Gay Rum.
The agreement will allow these businesses and many others across the Caribbean to trade like they do now, without any additional barriers or tariffs.
It eliminates all tariffs on all goods imported from the signing countries into the UK, while those Caribbean states will continue gradually to cut import tariffs on most of the region’s imports from the UK.
The UK is an important export market for the Caribbean, and the UK bought 100% of Saint Lucia’s banana exports, as well as 69% of Belize’s banana exports in 2017. In addition, 81% of Guyanese and 64% Jamaican sugar cane exports went to the UK.
These preferential terms are part of the UK government’s commitment to supporting developing countries to reduce poverty through trade. It will help them to grow their economies, create jobs, increase incomes and reduce reliance on overseas aid in the long-term.
UK Minister for Trade Policy George Hollingbery said:
“I am delighted to sign this agreement today as it will allow businesses to continue trading like they do today after we leave the European Union.
“It will help to support jobs in the UK and throughout the Caribbean, as well as ensuring that the British supermarkets’ shelves continue to be stocked with the best Caribbean produce such as bananas, sugar and rum.
“We have a long-standing commitment to reduce poverty through trade and this agreement will support jobs in key Commonwealth countries, such as Saint Lucia, Belize, Grenada, Dominica, Barbados and Guyana for whom the UK currently accounts for more than a quarter of their trade in goods with the EU.”
One company set to benefit from the Caribbean continuity agreement is Belize Sugar Industries.
Mac McLachlan, Vice President, International Relations, ASR Group said:
“Belize Sugar Industries warmly welcomes signature of this agreement. For many years BSI has shipped sugar to the UK.
“For an industry which supports the livelihoods of around 15% of the Belizean population and is the mainstay of the Northern Belize economy, retaining the opportunity for continued trade is essential.
“This long-term relationship is hugely important to us and other Caribbean sugar producing countries.”

Komal Samaroo, Chairman of the West Indies Rum & Spirits Producers Association (WIRSPA), and head of the Guyana-based Demerara Distillers conglomerate said:
“We’re extremely happy to see the culmination of this agreement which both sides have worked hard to achieve. The UK is a major export destination for our rums and we are pleased that the trade provisions will maintain our continued access to that market.
“The rum industry is the region’s premier export industry and its largest export earner after minerals, as well as a significant employer.
“The preferential provisions in the agreement will continue to give our authentic rum producers a much-needed boost vis-à-vis subsidised products from other countries”.
British High Commissioner to Barbados and the Eastern Caribbean, Janet Douglas, said:

“This is welcome news for UK business and all our partners in the Caribbean, allowing trade to continue seamlessly in the future.”

In 2017 total trade between the UK and the region was worth around £2.5 billion. Replicating this deal will allow the UK to continue building the trading relationship with our Commonwealth partners.

Based on current trade flows, exporters of bananas and other fruits and nuts could save over £14 million a year in tariff charges that could apply if the agreement wasn’t in place, while exporters of sugarcane and other sugar products could save more than £20 million. Consumers in the UK will continue to benefit from more choice and lower prices for products from these countries.

The agreement also covers the services sector, including tourism, which will benefit British nationals who spend £900 million a year during some 900,000 visits to the Caribbean.

It will help small and medium businesses in the Caribbean to promote sustainable tourism and follow international environmental and quality standards.

The UK is seeking to provide continuity for existing EU trade agreements covering more than 70 countries that account for 11% of total UK trade and we are making good progress having recently signed agreements with Switzerland and Israel.

Like all these agreements, the new UK-CARIFORUM agreement replicates the existing trading arrangements as far as possible. It is expected to come into effect as soon as the implementation period ends in January 2021, or from as soon as possible after the UK leaves the EU if we leave without a deal.

Grenadians to vote on June 23