PORT-AU-PRINCE, Haiti (HCNN) — US medical doctors at a trauma hospital in the Haitian capital said on Sunday that a judge handling a high-profile case died on Saturday evening after being diagnosed with a stroke, contradicting rumours suggesting the magistrate had been poisoned or assassinated.

Jean Serge Joseph, a judge handling a case of alleged unlawful activity charges brought against members of the presidential family, died on Saturday after being received at the Bernard Mevs Hospital and examined by an American physician volunteering with the Trauma Center.

“When the patient arrived here he was in a very serious condition. We did an x-ray, we did a CT scan for him, we gave him oxygen and we did everything we could to try to save his life,” Dr Vincent De Gennaro told reporters during a news conference at the hospital on Sunday.

“But he had a big stroke and he died,” said De Gennaro, from Fort-Lauderdale, who was speaking in Creole, on behalf of his colleagues.

The judge, who was personally seen by Dr Richard Thorpe from Minnesota, arrived at the hospital at 3 o’clock in the morning on Saturday and died at 8 pm the same day, according to medical sources.

The deceased magistrate was in charge of a case that involved the country’s first Lady Sofia Martelly and one of the president’s sons, Olivier Martelly, accused of misappropriation of funds and usurpation of title by two lawyers linked to opposition parties.

The presidential family has repeatedly denied the accusations, arguing that the First Lady and her son could not be involved in any embezzlement of public funds because they are not managing such funds.

Public funds are handled by ministers and other functionaries who are personally accountable to Parliament and relevant administrative jurisdictions.

People in the entourage of President Michel Martelly say the accusations are unfounded and claim they are orchestrated by political opponents who wish to undermine the Haitian leader’s efforts to fulfill his campaign promises.

Joseph issued a recent ruling, calling on President Martelly, who has the legal authority to allow high-level functionaries to appear before court judges, to authorize Prime Minister Laurent Lamothe and several other government ministers to testify in the case.

The Port-au-Prince prosecutor, Lucmane Dellile, appealed the judge’s ruling for alleged violations of judicial proceedings. The Appeal Court has yet to decide on the issue.

Following the death of the judge, rumours spread around the country and on the internet suggesting the magistrate had been poisoned or assassinated as a consequence of his handling of the high-profile case.

There were also allegations that President Martelly and Lamothe had meetings with the judge to pressure him to give up the case, which a source close to the Prime Minister’s Office, speaking to HCNN on condition of anonymity, has categorically denied.

“Why would the president and the prime minister pressure the judge to give up a case that was no longer in his hands and that was transferred to the appeal court,” an official close to Lamothe told HCNN.

“It would be silly. There was nothing judge Joseph could have done even in the event he had wished to do something,” explained the official, who asked not to be named because not officially authorized to publicly comment the issue.

Meanwhile, Haiti’s justice minister denied on Monday that the country’s highest political authorities attended a meeting with the high-profile judge during which the now deceased magistrate would have come under intense political pressure to give up the case involving the presidential family. 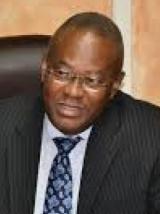 Jean Renel Sanon rejected allegations that President Martelly, Prime Minister Lamothe and himself, among other personalities, had participated on Thursday in a meeting with judge Joseph at the office of former justice minister, Jean Gary Lissade, also an adviser to the president.

“President Martelly, Prime Minister Lamothe and myself never attended such meeting and we had never pressured the judge to do anything,” Sanon told HCNN on Monday.

“Such allegations are totally false,” he said.

A lawyer close to the deceased judge, Samuel Madistin, said the late magistrate had told him about death threats and pressure he received during a meeting on Thursday with Martelly, Lamothe and Sanon.

“The judge told me before his death that he had a meeting at Mr. Lissade’s office with President Martelly, Prime Minister Lamothe who pressured him,” reported Madistin.

“He told me his life was threatened and they gave him an ultimatum that he had to hold a session on Tuesday in order to put an end to the case,” Madistin, an outspoken and critical voice of the government’s policies, told a private station in the Haitian capital.

Lawyer Gary Lissade, designated as the alleged host of the supposed meeting, issued a communiqué to deny having hosted such discussions.

“I declare that the president of the Republic, the prime minister never attended any meeting at my office with judge Jean Serge Joseph or with any other judicial authority,” read the communiqué that deplores the utilization of the judge’s death for political reasons.

Sanon claimed that those bringing these accusations have hidden political motives and ensure that the current government is committed to democracy and the rule of law.

“That’s why we have taken unprecedented steps to ensure that judges enjoy maximum independence in the accomplishment of their task,” Sanon said.

“We did so to an extent never seen before in the history of this country and we’ll continue on the same path,” he added.