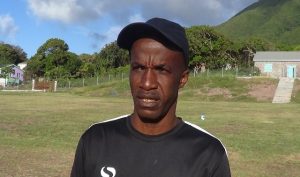 Michael WISE Herbert and his coordinating committee, must be given special praise for their grit, determination and dedication to the task.
Honestly, he must have the PATIENCE of JOB.
Having advertised the start of the VPL female version of the tape ball cricket tournament, to commence on Sunday 30th June and realizing that no more than four ladies showed up for the scheduled 1.30 pm start, most organizers would have called off the tournament.
However, the organizers waited and waited and eventually had a start to the tournament, sometime after 3 pm, without any opening ceremony.
Game one was actually played with females mixed with some males and sometime after 5 pm when there were enough ladies on hand, a full-fledged women’s’ game was played.
In game one, the Judy Morton led SDA Jets got to 59, with Adona Bussue topscroing with 15 and Judy Morton getting 5.
Myrthlyn Elliot secured 4 wickets for 5 runs with her wily offspin and received the MVP prize of $50.00 from the Byron family reunion.
Her team overhauled the total with Loretta Hendrickson being the most outstanding female batter, with her 16 not out.
In game two, played strictly between ladies, the Loretta Hendrickson team got to 49 from 8 overs and the Adona Bussue led team got to 51, with Adona Bussue leading the way with a remarkable 47 not out!
She secured the MVP prize of $50.00, courtesy of her friend, Emultine’s Catering.
Herbert is now anticipating more women to show up early on Sunday 7th July for the 2 pm scheduled continuation of the league when two teams will face off:
The SDA Jets, led by Judy Morton and the ROCKETS, led by Myrthlyn Elliot.
The MVP prize money has been raised to $100.00 and Business man CAT, is also putting another $250.00 on the line:
$50.00-woman making the most runs
$50.00-woman getting the most wickets
$50.00-woman hitting the most sixes
$50.00 -woman hitting the most fours
$50.00 -spectator taking catch one handed
Emultine’s Catering will also give $50.00 for any woman getting 25 or more runs.
The following Sunday- 14th July, the grand finals will be played between the same two teams.
Hon Eric Evelyn is putting up $500.00 for the winning team and the second placed team will receive $300.00, complements Clive Evelyn’s Construction.