Charlestown, Nevis (Thursday, March 13th, 2014)- Parliamentary representative for Constituency No. 11- the parishes of St. James and St. Thomas’, the Hon. Patrice Nisbett said he was very pleased with the attendance and participation of his constituents and well-wishers who supported his recent week of activities to commemorate 14 years as a Federal parliamentarian. 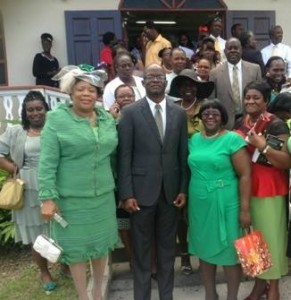 He said he hoped next year’s celebration, the 15th, “would be even bigger and better”!

The highly successful week of activities commenced with a Church Service at the New Testament Church of God in Jessups on Sunday, March 2nd, and culminated with a Beach Picnic at Oualie Beach on Sunday, March 9th.

The high point was a well attended Town Hall Meeting at the Franklyn Browne Community Centre (Camps) where residents from right across Nevis heard from their parliamentarian, as well as Leader of the Nevis Reformation Party (NRP) the Hon. Joseph Parry and member of the Nevis Island Assembly, the Hon. E. Robelto Hector.

In his featured address, Nisbett outlined some of his many accomplishments over those 14 years on behalf of the people of Nevis.

· Allocating a portion of his salary to establish a scholarship fund for students in the parish of St. James and St. Thomas.

· Piloting legislation so that companies doing business in Nevis were obliged to pay their corporate taxes directly into the Nevis Treasury for the first time since Independence in 1983.

· Passage of the Long Service Gratuity Act which gives long service employees in the private sector a financial package at the end of their service to the company, hotel, factory etc.

· Ensuring monies from the Sugar Industry Diversification Foundation (SIDF) reached Nevis through programs such as PEP, WISE, SAFE and SEED.

· Extending the one to one lap top program to Nevis to the benefit of thousands of high school students and teachers.

Another high point was the “Meet and Greet” held on Tuesday, March 4th.

“It gave me an opportunity to speak with a wide cross-section of the community. I was also thrilled to meet the elderly and ascertain their needs, and find visionary ways in which we can move forward as a progressive nation,” Nisbett said.

He said he was very pleased to hand out food hampers to the elderly as a show of appreciation for their hard work and sacrifice which has been to the benefit of the community.

On Thursday, March 6th, there was a Karaoke Night at Cherry Tree, Barnes Ghaut, where patrons sang to their heart’s content.

On Friday March 7, Nisbett unveiled his new constituency office located at the site formerly known as Sunshine Shoppers in Newcastle across from the airport. Nisbett was supported by his NRP colleagues, as well as St. Kitts- Nevis Labour Party candidate Mr. Konris Maynard and his wife and several members of the St. Kitts- Nevis Labour Pickney organization.

After the official opening, guests partied and danced the night away with the popular Odisi Band out of Brickiln.

On Saturday, March 8, in the forenoon, a Health & Legal Aid Clinic was held at X-Petrol at Camps. Constituents received free health checks and free legal advice organized by the executive of NRP’s St. James/St. Thomas branch, while in the evening a Social was held at the Squeeze Dem Up Bar in Brickiln including an island-wide domino competition. A team out of Brown Hill won that competition and took away a prize of $1000.

Prior to Sunday’s grand finale – the beach picnic – scores of well-wishers worshipped at the Eden Brown Church of God at Butlers on Sunday morning.

Nisbett was first elected to the Federal parliamentarian on March 5th, 2000, and has given 14 years of uninterrupted and unstinting service. He presently serves as Minister of Foreign Affairs, Labour, Homeland Security, Justice and Legal Affairs. He was also formerly the Attorney General of St. Kitts- Nevis

Water services to be interrupted in St. John’s area