Hundreds of cricket lovers from St.Kitts and Nevis, left the Warner Park Cricket stadium on Wednesday night, sorely disappointed after another dismal performance by their beloved West Indies Cricket team.

After the high of defeating Australia in Monday’s match, Government offices closed early at 2 pm and many private enterprises duly followed suit.

So, the Western mound and most of the stands were pretty packed with waving and cheering fans as they watched the encounter between the West Indies and South Africa.

Jason Holder won the toss and just as he did on Monday, sent the opposition in on the dry, hard Warner Park track.

This time around, the move back-fired, as Hashim Amla and Quinton De Cock were not separated until they had established an opening partnership of 182 runs, initially keeping the score board ticking over with some crisp boundaries and taking well run singles and twos and later upping their aggression by playing some innovative and inventive shots like scoops and reverse sweeps.

St.Kitts-Nevis Patriots skipper FAF Du Plessis then got into the act, aided by an exhilarating burst from the renowned AB DE Villiers and Chris Morris to propel the Proteas to an imposing 343 for 4, before the 50 overs ran out.

The West Indies in response, excited the fans as Andre Fletcher and Johnson Charles commenced the response in typical T-20 mode, hitting the ball to all parts of the Park, much to the joy of the home fans.

However, everything changed shortly after spinners Imran Tahir and Tabraiz Shamsi got into the attack and aided by a number of injudicious shots, soon placed the home team on the back foot.

Fans were still hoping for the nigh impossible but their hopes waned as ‘miracle man’ Carlos Brathwaite was comprehensively bowled for a one ball duck and after Kieron Pollard had promised much, with a tremendous heave on top of the roof of the main pavilion, he too soon holed out on the mid wicket boundary after mis-hitting a long hop from Tahir.

The fans started to trickle out of the Park but the majority waited around for some brief entertainment from Jerome Taylor and Sunil Narine who enjoyed some lusty hitting at the end before Taylor was bowled by Tahir, to give him his 7th scalp in the match and the Windies succumbed to 204 all out. 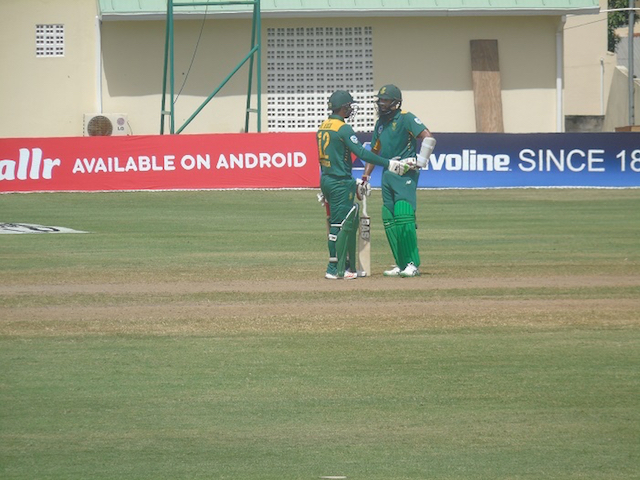