Manager at the Drag Race Unit in Charlestown, Carlos Vanterpool, on Friday 26th April confirmed that the annual Drag Race meet scheduled as part of the upcoming Winfes’ activities, is well and truly on. 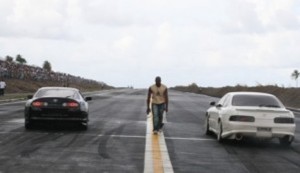 According to Vanterpool, there are some rumours making waves around the Caribbean indicating that the scheduled meet has been cancelled but that this could not be further from the truth.

He stated that plans are being finalized for the event and that apart from racers from St.Kitts and Nevis, team Montserrat has already confirmed participation and a boatload of racers and spectators are expected in, as was the case some time ago.

Negotiations with racers from St. Maarten are ongoing and there are some cars from Antigua already on island.

The meet is scheduled for Sunday May 19th with Saturday 18th being used for the test and tune day, with the actual race day being on the Sunday.

The cost remains the same: $20.00 for adults and $10.00 for children. A live band will also be on show, in collaboration with the Winfes’ committee.

Vanterpool is encouraging the general public to be a part of what he predicts will be an exciting event.