Winners of Cook Off Competition Awarded for Excellence

The occasion was also used to hand over musical instruments. 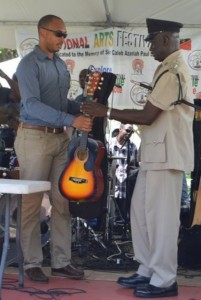 Ambassador in the Ministry of Culture and Sports, His Excellency Jonel Powell, presented the awards and cash prizes to the winner Andrea Clarke-Roberts and second runner up Dave Allen. Josephine Joseph was awarded the third place while Mary Lewis was recognized for participation. The best dressed chef in the competition went to Andrea Clarke-Roberts, and Dave Allen received the prize for having the best decorated booth.

Director of Culture, Troy Mills, complimented all of the participants for their effort and the public for its support. He also presented two guitars to the Prison Band which provided some of the entertainment for the crowd that mulled about in Independence Square. The instruments were donated by Chuck Fox, who resides in New York, USA. He reportedly was assisted by Colgate University, a private liberal arts college located in New York.

Director Mills credited Mr. Fox for his contributions to the Ministries of Culture, Health and Education over the years. “The Government of St. Kitts and Nevis always welcomes contributions such as these [instruments],” he said. “We implore nationals at home and abroad to follow the example of Mr. Fox.”

The guitars were accepted by Alton Liburd, Chief Prison Officer, who thanked all involved for the gifts and promised that they will greatly aid the rehabilitation of the inmates.

National Pot-pourri was designed to showcase St. Kitts-Nevis’ creative and cultural industry through music, dance, art and food. It was organized by the Department of Culture.