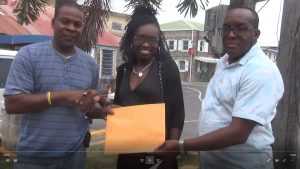 The grand draw of the Masters Cricket team’s raffle, was made at the DR Walwyn Plaza on the afternoon of Thursday 30th May.
The Masters Cricket team has been making concerted efforts at fund raising towards their upcoming trip to Antigua, in defense of the Leewards masters’ trophy, which they won last year.
One such fund raising event, was an oldies’ dance, which was held at the NEPAC courtyard last weekend and another was the grand raffle of a huge television set as the first prize and a trip to Antigua to witness the upcoming Leeward Islands masters tournament, as the second prize.
Officiating at the draw, were: President of the Nevis Masters’ club, Mr. Franklyn KUT Daniel and the manager of the team, Mr. Oscar ASTRO Browne.
Two persons were randomly selected to pull the tickets from the huge box, which was well shaken in public view and the grand winners were as follows:
Llewelyn Collins of Cherry Garden-winner of the television set
Roxanne Jeffers of Mount Lily-winner of the ticket to Antigua
Mr. Collins noted that he had won the television set in time to watch the cricket world cup and Mrs. Jeffers expressed her joy at winning the trip and hoped that that Nevis Masters win the upcoming tournament.