Coach at the Jocelyn Liburd Primary School (JLPS), Mr. Kurvin Wallace, has hailed the sixth annual Kids Athletics event which was hosted and coordinated by his school, as a huge success.

He noted that once the program was introduced to coaches on the island, some years ago, he decided to make it a regular feature to be coordinated by his school and also to invite the other Primary Schools to take part as well.

The event was held on Friday 16th October, at the Hard Times playing field, as has been the norm and commenced shortly after 1 pm with a brief opening ceremony.

The ceremony was chaired by Headmistress of the JLPS, Miss Barbara Hendrickson who gave welcoming remarks and this was followed by prayer done by Mr. Tariq Dore. The national anthem was sung by all present.

Headmistress Hendrickson indicated that she was pleased at the turn out of the many schools represented and noted that the school was celebrating its 37th year.

Coordinator at the Youth Department, Miss Zahnela Claxton also delivered brief remarks. She commended the JLPS and especially Coach Wallace for the Kids athletics initiative. She encouraged the children to participate and learn team work and grow to love athletics.

Education officer for the JLPS, Mrs. Ilena Mills spoke on behalf of the Ministry and Department of Education. She stated that she was very pleased at the collaboration between the schools and congratulated the JLPS on its 37th anniversary. She also had commendations for Coach Wallace as well.

Coach Wallace then gave a brief overview as to how the day’s activities would be conducted and pointed out that one of the critical factors of such an event, was to take away the competitive school spirit, normally exhibited at the Inter Primary sports meet and so the athletes were divided into groups which represented all of the schools present.

He noted that the skill sets in focus would be running, jumping and throwing.

The focus of the activities at the various stations included: Throwing the cricket ball; box jump; sprint hurdle relay; over the head throw and formula one.

The vote of thanks was moved by guidance counselor at the school, Mrs. Tamecia Stanley

It was obvious that the athletes and the spectators thoroughly enjoyed themselves and adjudications were made by the various coaches as the athletes tried to impress at all of the stations.

At the end of the exciting afternoon, every single athlete received an impressive looking certificate of participation.

Wallace also indicated that at a later date, once the final tabulations were completed, the top male and female athletes for the day will receive special awards. 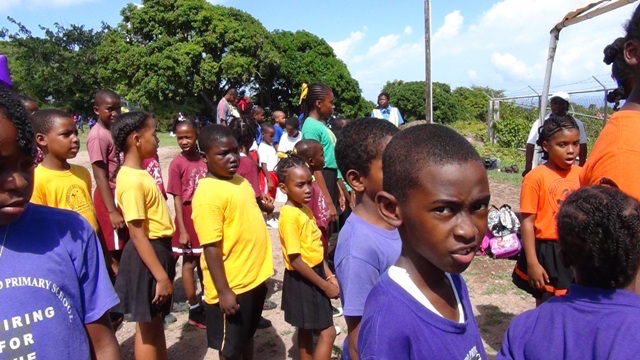