The second edition of the Giant Malt Relay Championships takes place this weekend and already participating teams are gearing up to see who walks away with the bragging rights as the top relay team in 2018.

Athletes from the secondary schools will be competing in three categories, namely: under-14 years, under-16 and under 18 categories. There is also expected to be an open category.

“The Giant Malt Relay Championships gives track and field loving fans in St. Kitts and Nevis another chance to see some of their favourite national athletes, as well as the up and coming stars of athletics in the Federation compete at a very high level,” Public Relations Officer of the St. Kitts and Nevis Amateur Athletic Association (SKNAAA), Mr. Kilony Johnson said.

“Coming on the heels of three successful development meets, the relay championships also gives athletes and their coaches another platform they can use as a measuring stick to see how their respective training is progressing, while at the same time entertaining fans with exciting and exhilarating races in one of the most anticipated events at any athletic competition – the relays,” Mr. Johnson continued.

The championships commences at 2:30pm with the official opening ceremony. The first race, the female Open 4X200M relay, takes place at 3pm. 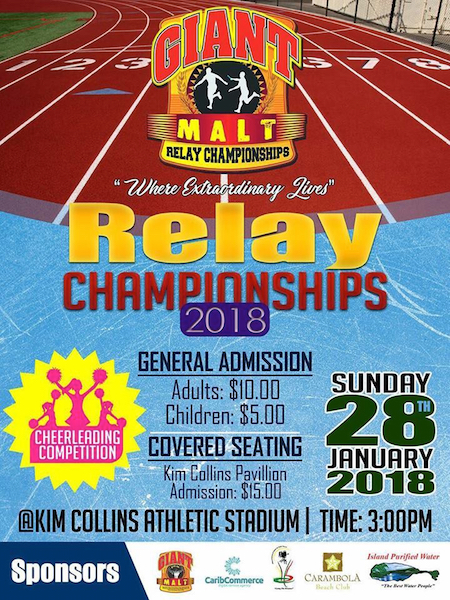