(CHARLESTOWN NEVIS)- The Department of Agriculture on the island of Nevis, hosted its 21st Open Day and Food Fair at the Charlestown Secondary School Grounds on Thursday, March 26, 2015 under the theme, ‘Strengthening the Drive towards Food Security’.

This year’s event is been held under the distinguished patronage, of Ms. Roslyn Cranston, a long serving member of the department. Ms. Cranston, who is a resident of Hamilton Estate, has been employed at the Department of Agriculture for over three (3) decades stemming back to as far as 1980. Since taking up employment with the department she has worked at every agriculture station on the island but seemingly has a special love for the Prospect Agriculture Station where she has been working for the past 24 years.

Chairperson of the ceremony, Mr. Eric Evelyn, gave the opening remarks. He assured those gathered that they were in the right place at the right time because over the two days of the event, they will witness and get a true experience as to what have been happening in the Agricultural Industry on the island of Nevis. Mr. Evelyn noted that the Agriculture Department was extremely happy with what had been accomplished over the past year and they looked forward to continued hard work in the future.

Director of Agriculture, Mr. Keithley Amory, also gave remarks. Mr. Amory noted that the theme chosen for this year’s event, ‘Strengthening the Drive towards Food Security’ signaled the commitment of the Department of Agriculture in ensuring food security on Nevis. He indicated that over the years the Department of Agriculture has been adopting and implementing various methodologies and this year is no exception. He continued, “We have to implement different methods in order to be successful and that has been done over the past twelve months”. In conclusion, the Director urged the public to whole heartedly support the event.

Minister responsible for Agriculture, Hon. Alexis Jeffers, gave some brief remarks. He stated that the past year was quite challenging, but the Department had accomplished much due to the hard work and diligence shown by the staff. The minister also noted that the farmers and fishermen should be highly commended for the sterling contribution that they have made and continue to make to their beloved island. In closing, he noted that his ministry will continue to thrive for excellence, in order to satisfy the needs of the people.

The vote of thanks was delivered by Mr. Walcott James, a long standing worker at the Department of Agriculture.

The event is scheduled to span over a two-day period, to conclude on Friday, March 27, 2015. 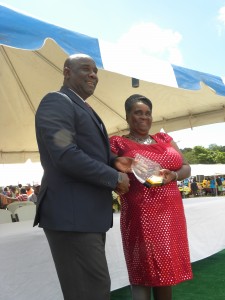