There was a huge gathering of the older boys at the school, as they took to the grueling track. 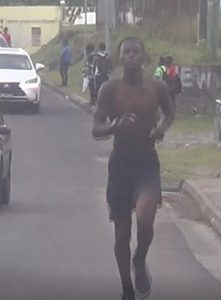 The race commenced in the vicinity of Best Buy Supermarket and the athletes made a left turn by Brino’s shop, into Hardtimes and then up the steepling 16 acres hill; across to Zetland’s; back on to the main road and finishing at the school.

Trevon Dunrod was the ultimate star.

He was in a race with himself, or better put, a race against the clock.

His stated purpose and goal was to break the long-standing record established by one of the school’s former super athletes, Leroy Chapman.
So, Dunrod took the lead, close to Brino’s shop and left his competition in the dust.

However, Leroy’s Chapman’s record is obviously no mean feat and proved too tough to be broken on the day.

Statement by the CCJ President on the passing of Nancy Anderson

His Royal Highness the Prince of Wales and The Honourable Mia Mottley, Prime Minister…