‘Beautiful Football’ At the Digicel Kick-start Clinic In Suriname 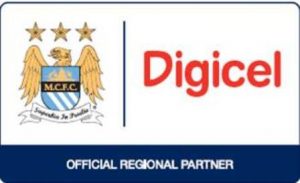 Friday 13th May 2016 – Paramaribo, Suriname: Manchester City FC coaches arrived in Suriname to deliver the Digicel Kickstart Clinic and were greeted with the first showers which marked the start of Suriname’s rainy season. However, this didn’t put a damper on the Clinic as Suriname’s top youth players were ready and waiting to develop their football skills.

Even though the primary language spoken by the players is Dutch, they were still able to take on the strategies and tactics that the coaches shared with them through various practices and game situations. Manchester City FC Football Delivery Manager and Digicel Kickstart Lead Coach, Lewis Childs, said; “We were happy to see that all the boys were ready and waiting for the start of the Clinic. It is clear that they love football – even when it rained heavily during some of the sessions, they never slowed down – they maintained a high tempo throughout the practices and games. We were very impressed with all the talent we saw on the pitch this week.”

Former Digicel Kickstart Academy players also visited the sessions and encouraged the participants to do their best. One of the past players said; “I want to encourage the players to listen to the coaches and give it their best effort. The coaches are here to help them develop their game and so they need to take the opportunity and make the best of it.” Having participated in the Clinic and the Academy, these past players are now proud members of the national team – which is testament to the strength of the Digicel Kickstart programme in giving young players across the Caribbean the foundation to improve their game and achieve their dreams on and off the pitch.

At the end of the two days, the coaches selected three players who will attend the Digicel Kickstart Academy in June, these were: Ferando Hoepel, Jaycee Marsidin, Roscello Vlijter. The boys will join other top players from across the Caribbean and Central America at the week-long Digicel Academy where they will receive another round of intensive training. Here, the boys will have the opportunity to impress the Manchester City coaches further, in the hopes of being among the top three players who will be given the chance of a lifetime to train at the City Football Academy, Manchester City FC’s elite training and youth development facility in Manchester, England.

Super Overs should not be used to decide ODIs, according to South African opening…