Berm will trap more water for the Basseterre aquifer

BASSETERRE, ST. KITTS, SEPTEMBER 1ST 2014 (CUOPM) – Deputy Prime Minister and Minister of Public Utilities, the Hon. Dr. Earl Asim Martin has disclosed that the erection of a berm will result in trapping more water for the aquifer, which provides nearly 60 percent of water to consumers in Basseterre. 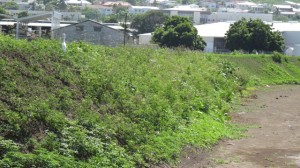 “I know some of us probably are wondering what that big heap of dirt there is for. That is a berm to retain the water and to prevent the water from going onto the road and down to the sea. This area is our aquifer, where most of the rainfall drain into the aquifer instead of running off into the sea. So it recharges the aquifer much faster than it would have charged before, that is what we have to do to make sure that we continue to provide potable water for the people of the Federation,” he explained at the most recent town hall meeting “Conversations for Progress.”

He told a packed New Town Community Center that almost 60% of the water in Basseterre comes from the aquifer.

“You would appreciate also that there are hotels being constructed on the South East Peninsula. You have the Park Hyatt, Imperial, Koi Resort and other hotels and residences and we have to make sure that we provide a continuous flow of water for residences and hotels. We have to make sure that we are able to recharge our aquifer on a continuous basis so we are able to provide water,” Dr. Martin said.

He gave the assurance that there will be no construction of homes on that eastern side of the playing field to avoid contamination of the aquifer and the sustained provision of potable water for this generation and future generations.