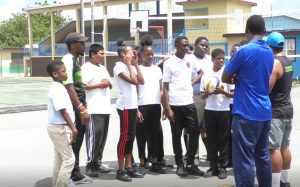 National Volley Ball Coach of St. Kitts and Nevis, Mr. John Carlos, is making an effort to develop an interest in the sport, on the island of Nevis.

On Wednesday 16th May, he held a session at the Grell Hull-Stevens Netball complex, with a group of students of the Charlestown Secondary.

He explained the fundamentals of the game and had them going through various preparatory drills before actually allowing them to play the game itself.

In an interview, he explained that he would have worked in developing the game in at least 14 countries throughout the Caribbean, but is currently settled in St. Kitts and Nevis, with a mandate of ensuring the future of the sport, by teaching it to the younger generation. He also coaches the St.Kitts-Nevis national Volley Ball team.

He noted that he has seen a lot of potentially good players, who just need to practice and work at the game.

He also alluded to the many scholarships on offer, once persons excel in the sport and the potential to make lots of money at the international level.

One of the Coordinators of the afternoon’s activity, Sports officer, Curtis Morton Jr, noted that contact was made with the national coach, so that the game could be taught in Nevis and for persons to become interested in the sport.

He pointed out that persons can one day excel and make it into the national team, as has Nevisian Rohan Jeffers of Butler’s and at least one other individual from Nevis.

Coach Carlos is also expected to conduct a session or sessions with officers of the Youth and Sports department, shortly.