Charlestown-Nevis- A brief but very significant ceremony was held at the Nevis Disaster Management Office’s Conference room, on the morning of Tuesday 30th April, as a sizeable cheque was presented to the Ministry of Education.
The ceremony was ably chaired by Miss Zahnela Claxton, Principal Education Officer, in the Ministry.
She referred to the occasion as one of jubilation and celebration. She indicated that the Dr. Lornette Mills-Rawlins Foundation has been donating to the school meals program from since 2013.
Mr. Ron Daniel, who was representing the Dr. Lornette Mills-Rawlins Charitable Foundation and the collaborative partner, the Nevis Association of South Florida, noted that the former entity used these basic pillars as its foundation of operation:
HEALTH
OPPORTUNITY
PHILANTHROPY
EDUCATION
He revealed that the cheque that he was about to present to the Ministry of Education, was to the tune of $30,600.00 EC.
He further stated that healthy meals will produce healthy children, which will result in a better end product, in terms of education.
He used the opportunity to appeal to other potential donors, to help in such a worthy cause.
This was later sanctioned by PEO, Miss Claxton. 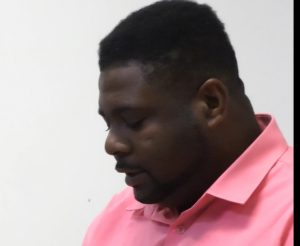 Also addressing the gathering, was Minister of Education, Hon. U Troy Liburd, who pointed to the fact that, from 2013 to the present, the donation of funds by the charitable foundations, was ‘substantial.’
He indicated that the donation was timely, as his Ministry is currently placing great emphasis on ensuring that the children are fed nourishing meals, as part of the schools meals program.
‘A nation’s health, is a nation’s wealth,’ he stated.
He reasoned that ‘it is better to give than to receive’ and so, with the significant donation from the charitable organizations, the teachers and personnel at the school meals program, will be able to give more to the children and the children in turn will become more healthy and productive and be able to give back more to the community.
He thanked Mr. Daniel for presenting the cheque and asked him to pass on his profound thanks to the members of the two charitable entities, on behalf of the people of Nevis.
The vote of thanks was delivered by PEO, Miss Zahnela Claxton who also thanked the principals of the primary and secondary schools present, for presenting the list of names of the children to be directly assisted, in a timely manner.
Also present at the ceremony were, Permanent Secretary in the Ministry of Education, Mr. Kevin Barrett; the heads of the various primary and secondary schools on the island and other teachers.
The Dr. Lornette Mills-Rawlins Foundation is the brainchild of Nevisian medical doctor, Dr. Lornette Mills-Rawlins, who originally halls from Rawlins village in Gingerland, but currently lives and works in the USA. 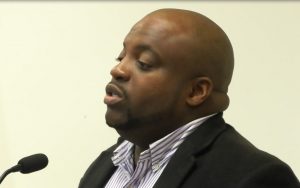 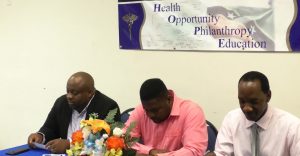