(CHARLESTOWN NEVIS)- On the afternoon of Wednesday November 13, 2013, all roads led to the Nevis Performing Arts Center (NEPAC) located at Pinneys Estate for the graduation and prize giving ceremony of the Charlestown Secondary School.

Under the theme, “Reflecting on the Past, Consolidating the Present, Illuminating the Future” the school bid farewell to a number of students. 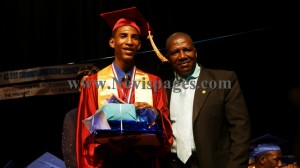 The ceremony began with the invocation by Pastor Eversley Pemberton. This was followed by the National Anthem.

Chairperson of the ceremony, Mrs. Vernesia Douglas-Walters gave the opening remarks. She told those in attendance, that she was delighted and pleased to be in such a magnificent edifice, to share such a remarkable day with the graduates. She urged the graduates to aspire for excellence and to stay committed to their dreams.

Principal of the institution, Mr. Edson Elliott, delivered the annual report. He noted that the school has always aimed, to provide the students with an environment in which they are motivated in all areas of the curriculum. The principal also acknowledged the assistance, of various businesses and individuals who continue to provide valuable support to the school. Mr. Elliott lauded the efforts made by the staff of the institution.

Premier of Nevis, Hon. Vance Amory gave some brief remarks. Mr. Amory reminded the graduating class that they are the future of Nevis, and after all the time invested in their studies they should not allow it to be wasted. The Premier said, “I know you stayed up late at nights calling friends and fellow classmates about questions and I am saying to you do not let all of this go down the drain”.

Premier Amory also noted that the teachers should be greatly appreciated for what the students have achieved. He indicated that government plays a role but teachers are the ones who have to deal with the daily problems.

Past student of the school, Mr. Ron Daniel gave the feature address. Mr. Daniel said he was extremely honoured and humbled to be the keynote speaker for an institution that has given him so much more than an education. He stated that he still has vivid memories of (CSS) with past principal, Mr. Wiltshire patrolling the premises like a real ‘Army General’. Daniel noted that the theme was a fitting one, since if persons are going to have an appreciation of our present situation we have to indeed reflect on the past.

The (CSEC) Valedictory speech was given by Mr. Omarie Daniel, the son of former parliamentarian in the Nevis Island Assembly Mr. Hensley Daniel. Young Daniel wrote eleven (11) subjects passing all in the process with eight distinctions. Omarie told the gathering that he was miles away from being the perfect child and there were times when he got frustrated. He said, “There were times when I got annoyed and upset when things were going in an unfavorable direction for me”.

He noted that none of what he achieved could have been possible without the guidance of his parents. In closing, Daniel said he was not standing as Valedictorian by himself. He continued, “I was molded by my environment and by my peers, therefore we are all Valedictorians”.

CAPE Valedictorian, Ms. Rochelle Wade, also gave some remarks. She stated to the audience, that she and her classmates endured some difficult times during the last year. She noted that the death of their classmate Chazere Davis was disheartening and difficult to and handle. Ms. Wade also spoke about the unfortunate situation of Renique Leslie and Uta-Trish Taylor who were both involved in a serious vehicle accident. She commended both students for showing resilience in the face of adversity after being absent from school for three (3) months. In closing, Ms. Wade thanked her parents for the ethics and values they instilled in her.

Entertainment was provided by Calver Lee Swanston, better known as‘Gharlic’. He sang ‘True Colors’ a song made popular by Cindy Lauper. The audience looked on in amazement as one Nevis’s most exciting entertainers thrilled them with his brilliance. No stone was left unturned. At one point ‘Gharlic’ left the stage and mingled with the crowd. When it was over, they gave him a resounding round of applause.

Presentation of Certificates and Prizes were done by Mrs. Ulida Gill. This was followed by the vote of thanks that was done by Theon Tross.

Gonsalves: Mandatory vaccination can be ordered for workers