(EMU) – St. Kitts, July 01, 2013: Following an impressive show of support, Director of Early Childhood Education Mrs. Jacquelyn Morris gives high praise to the public for its show of support for Child Month.
Ms. Morris who spoke to the Media Unit at Independence Square at the culminating event, said the march is becoming bigger and more meaningful to the wider community every year. 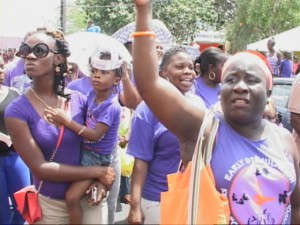 “The evidence is in the participation and the numbers of people that line the streets to cheer on the children as they march through Basseterre,” she said.

Hundreds of pre-schoolers, older children and adults gathered at the square following the event for a time of socializing and picnicking. According to the Director this ending activity started small and has mushroomed over the years into a huge event with bouncing castles, children’s games and activities, food and fun.

Commenting on the Theme for the Month “Early Stimulation – Key to Positive Child Outcomes,” Ms. Morris said she felt confident that the message had penetrated the airwaves and that early childhood educators, parents and other stakeholders in child development would seek to utilize some of the information that was shared.

She added that outside of the official events, each day care centre was encouraged to fully involve their children in activities that would stimulate and highlight their learning capacity. They were also advised to get parents intimately involved with a view to raising their understanding of methods of stimulation.
The Early Childhood Development Unit plans to start almost immediately, preparations for the 30th Anniversary of Early Childhood Education in St. Kitts and Nevis which will be celebrated in June 2014.