Coach of the Nevis Teachers’ Union representative Inter Primary track team that participated in the SKNU/NTU annual meet, last weekend, Kurvin Wallace, expressed pride in the performance of the athletes at the meet this year.

The meet was held at the Kim Collins stadium and Wallace indicated that they performed extremely well.

‘A lot better that last year,’ he stated emphatically.

‘We got more gold medals, we got over sixty medals—three times more that we got last year, so I am very pleased,’ he stated.

Wallace however, singled out Joric Daniel who came away with the under 9 class champion honours and who proudly displayed his trophy and medals.

He also referred to Jules Scarborough as having ‘torn up the track.’

In an interview conducted by Curtis Morton Jr, Wallace noted that all of the athletes did well and definitely better that last year.

He thanked all who assisted the team during the weekend trip to St.Kitts: The NTU-President Webbe; Ercia Blake and the entire team; the managing team; the coaches; the parents; persons who assisted with transportation and indeed every single individual or business entity who assisted in making the trip for the young athletes a success.

Wallace is hopeful that the games will be held in Nevis next year.

The St.Kitts Teachers’ Union representative team won over 150 medals, to win the games for the second year in a row.

Going forward, Wallace indicated that a team will be selected shortly from the athletes who went to St.Kitts, to get a team to represent Nevis at the annual CUT games which will be held in Tortola this year.

He is hoping for another outstanding performance from the children. 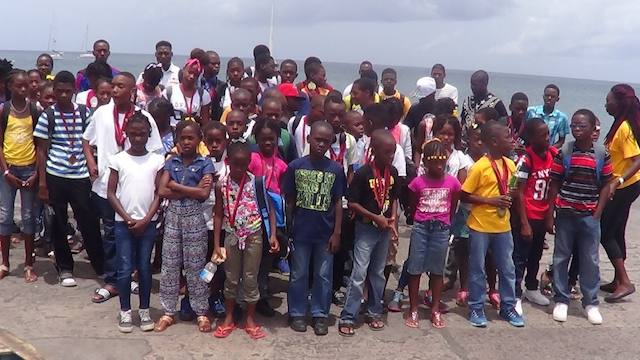