(CHARLESTOWN, NEVIS)- Since the launch of the Culturama 41 senior contestants on Friday, June 12, 2015, Executive Director of Culturama, Mr. Antonio Liburd has announced that the next event for the contestants would be a fashion show dubbed ‘Here and There’. 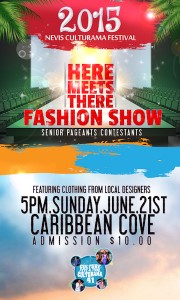 According to Mr. Liburd, the contestants for the Ms. Culture Swimwear, the Mr. Kool contest and the Ms. Culture Queen will participate in a fashion show on Sunday, June 21, 2015 at the Caribbean Cove starting at 5:00 p.m.

The contestants will hit the run way showcasing outfits from some of the Federation’s top designers and stores.

He also stated that a second fashion show is slated to be held on Sunday, July 12, 2015.

The Ms. Culture Swimwear and the Mr. Kool contest will be held at the Nevis Cultural Complex on Thursday, July 30, 2015. The Ms. Culture Queen Pageant will take place at the same venue on Sunday, August 2, 2015.

Meanwhile, the contestants for the Talented Youth Pageant will be launched on Sunday, July 5, 2015 at the Caribbean Cove.

The Nevis Culturama Committee is urging everyone to participate in the activities for Culturama 2015. Culturama is being celebrated this year under the theme ‘Culture, Fete & Fun, Culturama 41!’

Local Football Finals Set for This Saturday It Is Official.