Basseterre, St. Kitts (May 26, 2016) — Mother’s Day, as it is known universally, was this year celebrated on Sunday May 8. However a different and very special ‘Mother’s Day’ was observed Tuesday May 24 as the Development Bank of St. Kitts and Nevis held a Customer Appreciation Day as part of its 35th anniversary celebrations.

It was however a ‘Mother’s Day’ with a twist as it is the mothers who came out to pamper their children. After the bank’s door swung open at 8:00 am at the headquarter of the institution at the corner of Church and Central Street, the first customer who walked in at 8:04 am was a mother coming to pay for a student loan she had taken for her son.

Ms Heather Bassue-Browne is the mother of a famous son who studied at the Full Sail University in Florida, USA, thanks to a student loan from the Development Bank. The son is back in the Federation helping build the nation; but mother’s love is still strong. The son is Mr Bjorn Bassue, better known to the public as Mr Hype.

Back in St. Kitts, while Ms Bassue-Browne was at the bank to pay for an on-going loan, Ms Gloria Mills from Sandy Point came to pay the final instalment for a student loan taken in 2003 for her daughter to study Language Pathology in the USA. So great was the moment that she was congratulated by a director of the Development Bank, Mrs Rubina Nisbett.

“It was a great assistance because the step that she (her daughter) made she would not have been able to make it without the loan assistance,” said Ms Mills. She added that she felt comfortable now that the loan had been repaid in full, because their goal was to have it cleared as quickly as possible.

Another mother featured across in Nevis when Nurse Jacquelin Glasford, a longstanding client of the bank, came to the Development Bank’s branch to find out what her favourite bank was up to on Customer Appreciation Day: She was accompanied by her mother Mrs Mary Queeley. The power of a mother – do not leave home without Mum!

Mrs Glasford was warmly received at the Nevis branch by Mrs Jean Alcendor-Browne, a Credit Risk Management Officer, and her comments were that her experience with the Development Bank has been good and the staff friendly, and would encourage other persons to do business with the bank.

An interesting observation was made at the head office in Basseterre where of the first ten clients who walked through the doors to come to do business with the Development Bank, eight were women. The first man was at number six, meaning that five women had come into the bank before him.

Development Bank’s Support Officer for Marketing, Ms Vernitha Maynard, reported that the bank was a beehive of activity as clients were given drinks and snacks. In the house was entertainer Ms Judy ‘Purple’ Dupont who did on-camera interviews with clients that walked into the bank. While some declined, those who offered to be interviewed were quizzed on what they know about the bank. Those who answered correctly got handsome prizes.

Mr Solomon, an automotive technician from Shadwell was one of the many small business operators who benefitted from Fresh Start loans last year, and according to him the loan helped open up certain avenues for him in terms of tools and equipment and is glad to be a client of the Development Bank.

Manager at the branch office in Nevis, Ms Hyacinth Pemberton, said that they were encouraged by the large turnout for the Customer Appreciation Day. Most of them were non-clients, which clearly showed her that more people now know the role the Development Bank of St. Kitts and Nevis plays in the building of the economy by uplifting people’s lives. She hoped that soon they will be clients of the bank as they learnt a lot on what the bank offers.

“The Development Bank is celebrating its 35th Anniversary and our Customer Appreciation Day on Tuesday May 24 was observed under the theme ‘You are Special’ because that is what our customers are – special,” said Ms Maynard.

“We are happy to see that our customers also appreciate the services we offer to them and hence their patronising our Customer Appreciation Day. Indeed some who were not clients came in just to find out what the bank offers. The Development Bank is successful because it has a strong customer support and so we took time to appreciate them.” 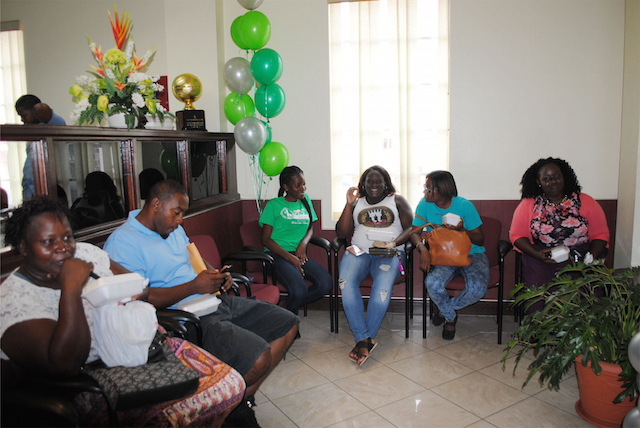