Brown Hill-Nevis-The closing ceremony of the now annual drumming workshop, hosted by the Department of Community Development, climaxed at the Maisie Bartlette Community Center in Brown Hill, on Friday 21st April.
Community Development Officer, Miss Malva Rawlins, who is instrumental in coordinating the workshop each year, noted that the workshop extended over a period of two weeks, from the 10th to 21st April. She thanked the Nevis Cultural Development Foundation and facilitator Mr. Binghi Parris, who took time out to teach the children drumming skills. 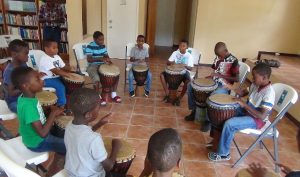 Mr. Parris for his part, in his brief remarks, thanked the children for being a part of the workshop. He stated that the workshop was a huge success. He indicated that some students came to the first session totally unaware of drumming skills and have excelled during the workshop.
‘Nevis has tremendous talent. Just needs to be nurtured and exposed. Children from Nevis can go on the world stage just like Bob Marley and others like him,’ he stated.

Director of Community Development, Mrs. Janet Meloney during her brief remarks, quizzed the participants on the origins of the drum and the unique beat that it produces. She informed them that the drum and the rhythms it produces, originated in Africa and was brought to the Caribbean when our fore fathers were brought to our region as slaves.
She noted that it was utilized at weddings; funerals; church services and other occasions and used to transmit specific warning signals.
She also commended Miss Malva Rawlins on her initiative of coordinating the workshop and also thanked the parents and the children for making sure that they are a part of such a creative workshop.

Mr. Parris then distributed the certificates to the participants.
Little Lite Browne then made a presentation on behalf of the Department of Community Development and the youthful drummers, to Facilitator Parris, who thanked everyone for the fine gesture.
Community Development Officer Tracey Parris, delivered the vote of thanks.