BRIDGETOWN, Barbados — “Bouncer” is the name that has been chosen for the Caribbean Premier League’s mascot following a social media competition where Facebook and Twitter fans were asked to submit their suggestions for names for the huge purple and green ball that forms part of the CPL logo. 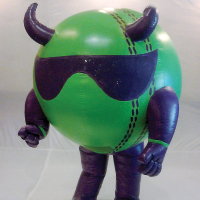 After sifting through hundreds of submissions, five names were shortlisted by the CPL marketing and event team, with David Ross’s idea emerging as the favourite.

Ross, who is from Barbados, posted his winning name on Facebook and explained his reasoning behind the label.

“I listened to the CPL theme song which is very bouncy; I saw the mascot video on YouTube and the mascot was bouncing and it just hit me,” said Ross. “The West Indies is known for bouncy wickets, and our brand of cricket and music is full of bounce. It is also catchy for children. Plus if you follow the ball it will bounce.”

CPL event director Rhonda Kelly agrees. “Bouncer is such a fun name and CPL is all about fun. It is very simple and as David said, it’s catchy for the children. We wanted to involve the fans in this process since our mascot is the face of CPL and will be interacting with fans at matches. I don’t think we could have come up with a better name ourselves.”

The mascot is a cricket ball with horns. While the ball is self-explanatory, Kelly explains that the horns are a reference to the J’ouvert celebration that is such an important part of Carnival revelries around the Caribbean. J’ouvert marks the official start of the Carnival festivities, and it usually takes place in the wee hours of the morning before the sun rises. It is a ritual that is accompanied by mud, oil, pitchforks, horns and pointed tails, particularly in Trinidad and Tobago, and is said to symbolise rebirth, newness of life and freedom, all associations that are reflective of the Caribbean Premier League messages.

For submitting the winning name, Ross will receive VIP tickets for the three matches being held in Barbados, and a brand new Samsung Galaxy S3 mini, courtesy of CPL sponsor, Digicel. Bouncer will personally hand over the new smartphone to David at the opening ceremony which he will attend with his family.

“I am elated about winning but even happier to just contribute. I was already planning to attend all the matches in Barbados with my family and now I have more reason to.”