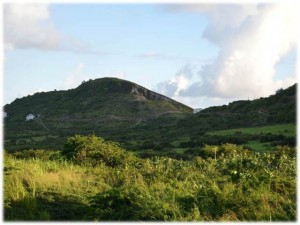 Giving an overview of the project, Mr. Farron Lawrence of SKN Homes pointed out that the development will be constructed with the foothills in the background and overlooking the proposed site for the National Park with the City of Basseterre, Port Zante, the Robert L. Bradshaw International Airport and the Caribbean Sea in the foreground.

“The project will comprise 9 buildings. The main building will actually be a hotel with 70 – 100 rooms operating as a full fledge hotel that will include lobby and reception area, restaurants, conference room, gift shop, sports bar, SPA and gymnasium, roof top patio, swimming pool, other common area facilities. So essentially that’s why it’s termed a hotel condo so the centre building would be a hotel and the buildings to the side would be the actual condominiums for long term living,” he told Prime Minister the Right Hon. Dr. Denzil L. Douglas, Minister of Tourism, Sen. the Hon. Richard “Ricky” Skerritt and private and public sector officials.

He said the structure of the building would be along the modern type.

“The building material use will be concrete, steel frame, glass and gypsum. Energy generation will be through renewable energy source and lighting and air will be daylight illumination and natural ventilation. The whole idea is to make these buildings as green as possible,” Mr. Lawrence said.

He said the expected economic impact in this project will see direct foreign investment of approximately US$70 million.

“The land has been acquired, purchased and owned by the Prime Developments Ltd and that was done approximately 3 or 4 months ago.

The requested concession from government has been negotiated and approved. The Architectural concept design completed and approved by DCPB. Agreements reached with architect and all engineering service providers to complete working drawings. The working drawing scheduled to be completed and submitted to DCPB by 28 February 2014. On the assumption of 4-8 weeks for approval of drawings by the DCPB, construction scheduled to commence by 1 May 2014,” said Mr. Lawrence.

“We have spent some time to go through this schedule and we believe it is attainable once we have the support and no major delays we can achieve this,” said Mr. Lawrence.

The key players are Mr. Abbas Fahim the senior investor and partner in this development and Mr. Sirous Motevassel, also an investor as well as a business consultant for the project and SKN homes which is owned by Mr. Lawrence as the developer.