Basseterre, St. Kitts (June 24, 2013) — The Hon Marcella Liburd, Federal Minister of Health and Environment, Social Services, Community Development, Culture and Gender Affairs is decrying the social stereotypes that have sidelined women in the past, and has thrown down the gauntlet in advising people to allow little girls to fly planes. 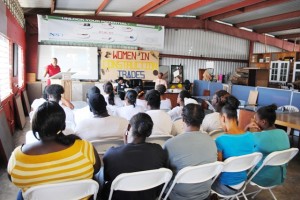 “What do you buy them (children) for toys?” posed Hon Liburd. “Trucks and planes (for boys) and the young girls get dollies. No trucks and no aeroplanes for them. That is also a message you are sending to them (girls). I am saying that sometimes you need to give the young girls some aeroplane so they can fly them too.”

Minister Liburd made the remarks last week Tuesday (June 18) at a function where she was the guest speaker at the third in a series of workshops, ‘From the Basement to the Attic’, organised for trainees in the Women in Construction Trades (WICT) of the People Employment Programme (PEP) at All Solutions International, CAP Southwell Industrial Park.

“To the women, I say, go for it,” said Hon Liburd. “Construction is a field that is not usual to see women… and we are saying, why women can’t be in construction? Is it that women can’t do the work that is done on the construction sites? I don’t think so.

According to Mrs Celia Christopher, who is the coordinator, Women in Construction Trades is a project of the People Employment Programme (PEP) that is aimed at introducing women to non-traditional areas such as in construction to enable them to fully participate in nation-building as equals.

She noted that WICT has 36 women, 27 of whom are based at All Solutions engaged in draughting, carpentry, plumbing, and other skills that they may be engaging from time to time; five women at the Newtown Community Centre who are engaged in electrical work, and four are at Stone Deals in Molyneux, where they are doing concrete fixing and steel bending.

WICT facilitator and owner of All Solutions International Mr Walcott Hillock said that they were using the analogy ‘From the Basement to the Attic’ not necessarily literally but figuratively.

“We are expecting from the minister a journey in our own life, in our times that would give us some encouragement and give us some insight into how one could actually, as we say sometimes … how could one literally take the journey, where you move from what is called the basement of our lives, to a situation where we end up in the attic or the penthouse,” commented Mr Hillock.

In her part, Minister Marcella Liburd said that as a government they were happy that under the People Employment Programme (PEP) women are being brought in the construction field, and added that she liked the slogan ‘From the Basement to the Attic’.

“You must look at it literally because if you are in construction building a home, you have to take them literally from the basement to the attic to completion from the ground floor, basement right up to the roof,” said Hon Liburd. In the figurative side she asked them to apply the same slogan to their personal lives.

“Whatever you do to enhance the lives of women, it enhances the lives of everybody, men, women and children,” advised the Minister. “So that is what we intend to do from the Ministry of Gender Affairs and from the PEP and so I am saying to you women, go for it.”

The function was also attended by Mr Geoffrey Hanley, PEP’s Project Manager, and vote of thanks was given by a WICT intern Ms Anatalia ‘Kelly’ Greene. Another of the interns, Ms Tamara Richards, rose to advise Minister Liburd of the things that they had learnt during their training.